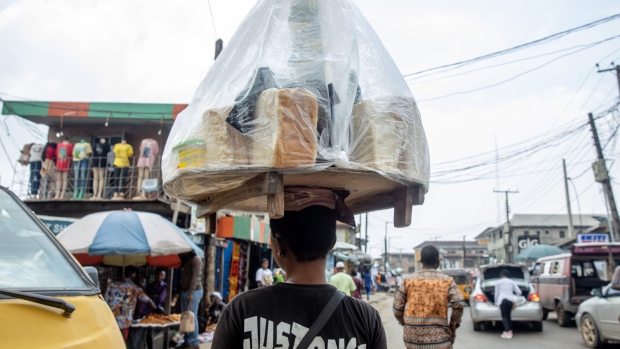 (Bloomberg) -- Nigeria unveiled a record spending plan that hinges on a massive increase in oil output and the fastest growth Africa’s largest economy has seen in almost a decade, targets that analysts said are too upbeat.

The plan unveiled by President Muhammadu Buhari to revive an economy that has struggled to recover since it exited recession two years ago projects expenditure will increase by 18% next year to 20.5 trillion naira ($47 billion).

The spending plan will drive economic growth, with a 3.75% expansion in gross domestic product forecast for 2023, Buhari said in his budget presentation to lawmakers on Friday.

To plug the funding gap, the government plans to borrow as much as 8.8 trillion naira from domestic and foreign lenders. That’s 76% more than the 5 trillion naira approved for this year.

“The 2023 budget estimates are very optimistic considering the current economic and security challenges the country is facing,” Ikemesit Effiong, head of research at SBM Intelligence said.

Africa’s top oil producer, alongside Angola, has seen production decline steadily since 2020, reaching multi-decade lows this year. The government has blamed massive levels of theft on the pipelines that crisscross the oil-rich Niger Delta in southern Nigeria.

The government usually falls short of its growth, revenue and deficit targets because of the underperformance of its oil industry.

To achieve the economic growth estimate “would require the commencement of local refining of petroleum products and substantial recovery in oil production, alongside sustained expansion in the non-oil sector,” Ibukunoluwa Omoyeni, an economist at Vetiva Capital Management said.

Buhari’s budget is also likely to be supplemented by the incoming administration of the candidate that wins February’s presidential elections to replace him.

Gasoline subsidies that Buhari said will be removed next year may also negatively impact the budget if retained by the new administration.

The government spent 1.59 trillion naira on fuel subsidies in the six months through June this year. “Its current fiscal impact has clearly shown that the policy is unsustainable,” Buhari said.

The country’s budget office in August projected that the fiscal deficit could rise to as much as 12.4 trillion naira in 2023, nearly three times total revenue, or 5.5% of GDP, if the government continues to subsidize fuel. Subsidy payments are expected to cost 6.72 trillion naira next year, it said.