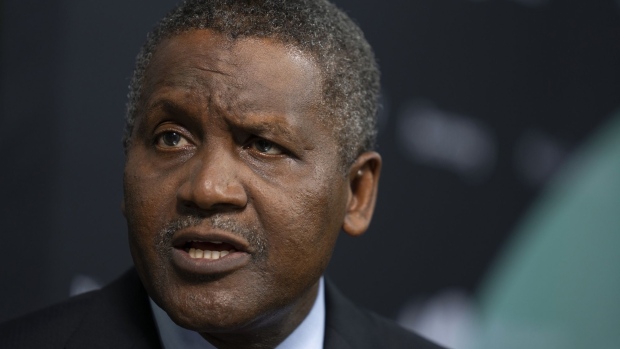 Aliko Dangote, president and chief executive officer of Dangote Group, speaks during a Bloomberg Television interview on the sidelines of the Bloomberg New Economy Forum in Singapore, on Tuesday, Nov. 6, 2018. The New Economy Forum, organized by Bloomberg Media Group, a division of Bloomberg LP, aims to bring together leaders from public and private sectors to find solutions to the world's greatest challenges. , Bloomberg

(Bloomberg) -- Nigeria has appointed Aliko Dangote, Africa’s richest man, to lead a committee commissioned with eliminating malaria in the West African nation as the mosquito-borne infection has made a comeback across the continent amid disruptions related to the coronavirus pandemic.

Africa’s most populous nation, which also has the highest prevalence of malaria globally, can save 687 billion naira ($1.6 billion) this year, and 2 trillion naira by 2030, if it were to put an end to the disease, President Muhammadu Buhari said on Tuesday.

Dangote, with a net worth of about $19.6 billion according to the Bloomberg Billionaires Index, was picked to lead an anti-malaria committee of 16 people. The decision was based on his previous support of “various health issues such as polio and primary health care system strengthening,” the president said in an emailed statement.

While the prevalence of the illness in Nigeria has been cut to 27% from 42% in 2010, the country still accounts for almost a third of the world’s malaria deaths.

A “significant funding gap” is preventing the nation from stamping out malaria, Minister of Health Osagie Ehanire said. Nigeria needs about 1.89 trillion naira to reduce malaria’s pervasiveness and mortality by 2025, Ehanire said.

Malaria killed almost half a million African children in 2020, with most being under the age of five, and the World Health Organization last month urged countries across the continent to apply for part of the $160 million in funding for the first vaccine for malaria.

Folorunsho Alakija, who made her money from oil, has also been selected for the committee. Other members include Tony Elumelu, a Nigerian billionaire who owns investment firm Heirs Holdings, and Herbert Wigwe, the chief executive officer of Access Bank Plc, the country’s biggest lender.