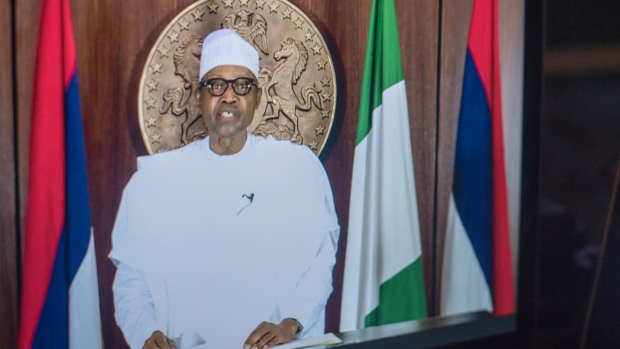 Muhammadu Buhari, Nigeria's president, speaks during the United Nations General Assembly seen on a laptop computer in Hastings on the Hudson, New York, U.S., on Tuesday, Sept. 22. 2020. The United Nations General Assembly met in a virtual environment for the first time in its 75-year history due to the pandemic. Photographer: Bloomberg/Bloomberg , Photographer: Bloomberg/Bloomberg

(Bloomberg) -- Nigeria’s president said he’s ordered the nation’s security forces to be merciless in their efforts to end violence and crime in Africa’s biggest oil-producing nation.

“We have given the police and and the military power to be ruthless and you watch it, in a few weeks time, there will be a difference,” President Muhammadu Buhari said in an interview Thursday with Arise TV, a Lagos-based broadcaster. “We are going to treat them in the language they understand.”

Nigerian opposition officials have criticized Buhari for failing to address growing insecurity. Africa’s most-populous country is contending with a decade-long war against Islamist insurgents in the northeast, a worsening conflict between nomadic cattle herders and crop farmers in the central and southern regions, and a new separatist rebellion in the southeast. It’s also facing a growing number of abductions of students that have shut down hundreds of schools.

The security forces have been “overwhelmed” by the insecurity in the northwest, but will tackle it soon, Buhari said. The police and military forces are being mobilized to take on separatist rebels in the southeast, he said.