Why it's best to look for names like Nike to get China exposure: Portfolio manager

Nike Inc. lowered its sales forecast as production and shipping delays hobbled the company’s efforts to meet strong demand for shoes and athleticwear.

Sales this quarter may fall as factory closures in Vietnam prevent Nike from keeping up with consumer demand, the world’s largest athleticwear company said Thursday. That means full-year growth will be in the mid-single-digits rather than a low double-digit percentage rate Nike targeted earlier.

Shutdowns in Vietnam due to a COVID resurgence are hitting athleticwear makers hard as they’re unable to supply enough shoes to consumers across the world. Adidas AG sourced about a third of its production there last year. Puma SE Chief Executive Officer Bjorn Gulden said in July the company was trying to source more from China to make up for the drop in Vietnam.

Nike shares fell 4.6 per cent to US$152.20 in pre-market trading in New York. The stock had risen 13 per cent this year through the close Thursday in New York. Adidas fell as much as 4 per cent and Puma as much as 2.9 per cent in Frankfurt trading Friday.

Nike Chief Financial Officer Matthew Friend outlined the issues during the company’s call with analysts. Most Nike factories in Vietnam remain shut due to government mandates and the company has lost about 10 weeks of production since mid-July, he said. Nike doesn’t expect the facilities to reopen until October, and they’ll take several months to ramp up manufacturing.

A spokeswoman for Puma said Friday that a few factories have started to operate in southern Vietnam recently and the company hopes for others to gradually open through October. Adidas said it’s also been temporarily reallocating production to other countries.

“It’s all about the inventory. Demand is clearly very high,” Bloomberg Intelligence analyst Poonam Goyal said on Bloomberg Television. “How much inventory is in transit, and is it enough to meet holiday demand?” 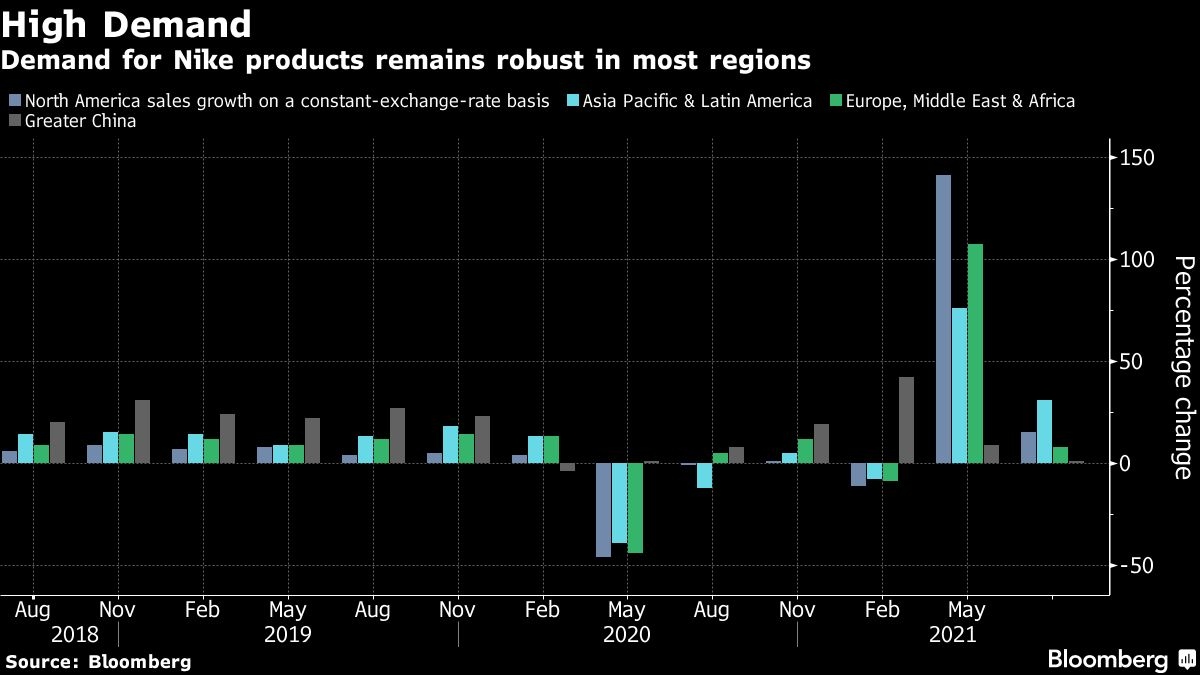 Nike’s inventories were at US$6.7 billion for the quarter, which is flat from a year ago, according to Thursday’s statement. The company said in-transit inventories were high due to extended lead times.

Shipping times from Asia to North America, meanwhile, worsened in the quarter, doubling to 80 days due to port and rail congestion and labor shortages. That’s left lots of inventory lingering in transit while margins were hurt by higher ocean freight surcharges.

“We had full-price inventory that was unavailable to use to serve current consumer demand in this quarter,” Friend said.

Revenue rose 12 per cent to US$12.2 billion in the three months through August after adjusting for currencies, missing analysts’ expectations of US$12.5 billion.

Nike has gained steam in recent quarters as sports resumed in earnest, with fans packing stadiums and kids returning to school playing fields. That’s driven demand for sneakers and apparel around the world. Now, the prospect of meeting consumers’ voracious appetite during the holiday months seems daunting.

Cuts in wholesale distribution have put renewed focus on Nike’s direct-to-consumer channel, which grew 25 per cent this quarter on a constant-currency basis.

Sales in China, meanwhile, which slowed last quarter after calls for boycotts over corporate statements on forced labor related to cotton production in the Xinjiang region, continued to be lackluster, rising 1 per cent when adjusting for currency effects.