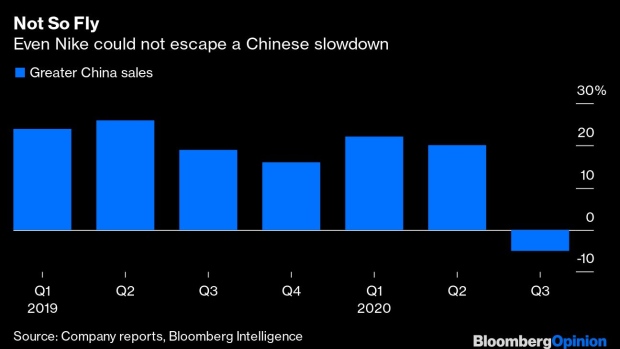 (Bloomberg Opinion) -- As consumer groups grapple with how to cope with the unprecedented impact of Covid-19, Nike Inc., one of the world’s most successful brands, has given a useful road map.

Unlike Britain’s Next Plc last week, Nike didn’t quantify the financial hit as the pandemic spreads. But it did give some helpful operational pointers, using its experience in China to identify four phases of the outbreak’s impact that retailers can expect to see on both sides of the Atlantic: The first is containment, characterized by large scale stores closures. The second is recovery, when brick and mortar outlets gradually begin to reopen. That is then followed by a return to normal conditions, and finally, sales growth.

Nike estimates that China has now progressed through its recovery phase and is returning to normal, with the maker of  the Air Jordan and Flyknit sneakers expecting sales growth to come roaring back in early 2021. Clearly, Europe and much of the U.S. is still in the containment phase. Based on the experiences in China, Japan and South Korea, this could last five to six weeks, Nike said.

The retailer weathered the China store closures far better than expected — with sales in China down 4% excluding currency movements in the third quarter—  and its strategy in the face of the coronavirus offers some interesting lessons for other retail brands in how to cope with an extended shutdown.

While stores were closed, Nike fired up online operations effectively. It also activated other digital ways of connecting with customers, such as home fitness apps offered for free. It worked. Weekly active users rose 80% in China over the course of the third quarter, as people were confined to their homes. That in turn drove them to purchase new workout gear, boosting digital sales by more than 30%.

It also helps that fitness equipment is still in demand when people are stuck at home. The same can’t be said for many products, such as glam dresses.

As the number of Covid-19 cases spreads in other markets, it’s of course not a given that every company can soldier on as seemingly seamlessly as Nike, which has been doing well for a long time. The company generated a better-than-expected $10.1 billion of revenue in the third quarter, even with the impact from China. Nike has a strong balance sheet and is highly cash generative. Even so, inventories rose 7% in the third quarter to $5.8 billion, partially reflecting the drop-off in demand from China. Retailers across the board will be scrambling with how to deal with a surfeit of stock.

Nike’s success has enabled it to invest heavily in its digital offering. Its fitness apps, which have come into their own in this crisis, are a case in point. Not all groups have been — or have the resources to be — so proactive. So it’s fair to expect that the companies with strong balance sheets, well-known brands and developed digital offerings should be able to navigate the crisis. Spain’s Inditex SA, owner of the Zara chain, fits the bill here.

By contrast, those companies that were already struggling, or burdened with large borrowings, will be particularly challenged by the first phase of containment.

As I have noted, the U.S. department stores look particularly susceptible to shuttered stores and shell-shocked shoppers. On Monday, Bloomberg News reported that Neiman Marcus Group Inc., the luxury retailer that has been struggling to ease its $4.3 billion debt load, was mulling options that could include a bankruptcy filing. And another Bloomberg report said J. Crew Group Inc. is suspending the initial public offering of Madewell, its most popular brand, a move necessary to cut its borrowings.

So while Nike can just do it, some laggards may truly struggle to get through this crisis.