The athleticwear giant, which posted surprisingly strong growth in the previous quarter, missed Wall Street estimates with its latest results. Sales amounted to US$10.4 billion in the third quarter -- far below analysts’ projections of US$11 billion.

Its revenue in Europe also were disappointing, partly because many stores there remain shuttered due to the pandemic. 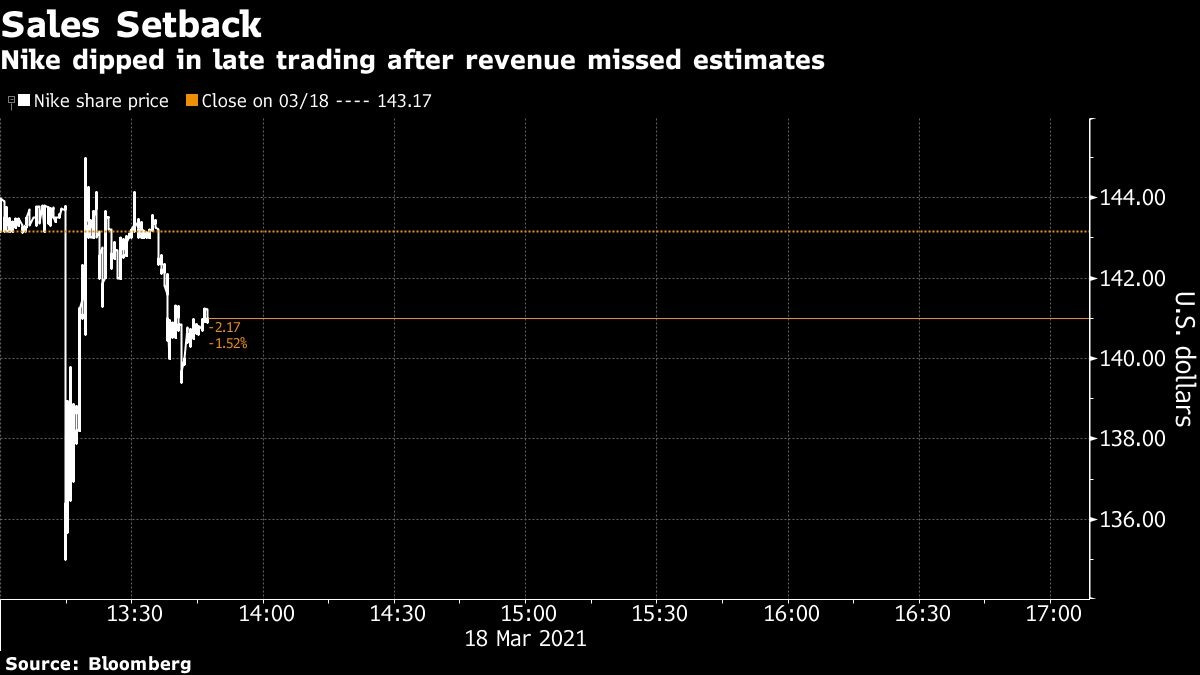 Nike shares fell as much as 5.7 per cent in late trading after the results were released, before rebounding somewhat. The stock had been up 1.2 per cent this year through the close.

The recovery has been uneven for Nike around the world. In China, where the virus has largely receded, sales have been robust: They jumped 51 per cent in the in the quarter ended Feb. 28 and beat estimates. North American revenue declined 10 per cent, partly because of port congestion and container shortages.

The shipping problems began in late December, with delays at U.S. ports on the West Coast adding three weeks to transportation times, executives said. That led to late shipments and a lack of supply for wholesalers. Inventory at Nike’s distribution centers fell 20 per cent with so much product stuck en route.

Even with the sales shortfall, Nike’s earnings topped estimates. It posted a profit of 90 cents a share, compared with a projection of 76 cents. The company’s gross margin was 45.6 per cent, more than a percentage point above the 44.4 per cent estimate.

E-commerce has helped Nike weather the disruption from COVID-19. Digital sales of its Nike brand soared 59 per cent last quarter, the company said, citing strong growth in every region.

“We continue to see the value of a more direct, digitally enabled strategy, fueling even greater potential for Nike over the long term,” Chief Financial Officer Matt Friend said in a statement.

Pandemic-fueled lockdowns have boosted e-commerce orders for many brands, but Nike has been especially aggressive in shifting sales to online channels and its company-owned stores -- rather than the retail partners it has used for decades.

But its strategy has had some hiccups. Nike drew the ire of sneakerheads in recent weeks when Bloomberg Businessweek revealed that the son of a top executive had a burgeoning footwear resale business. Ann Hebert, Nike’s head of North America, left the company and was replaced by Sarah Mensah, who previously ran the Asia Pacific and Latin America division.