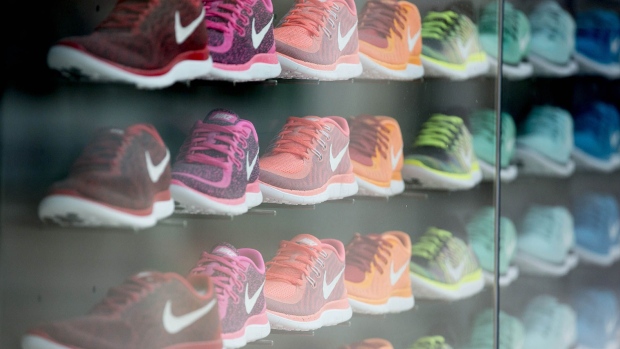 Nike Inc. 'Free' model sneakers sit on display in the window of the Nike Store inside the Westfield London shopping mall, operated by Westfield Corp. in London, U.K. , Bloomberg

Nike Inc. rallied in late trading after growth in online orders helped third-quarter sales beat Wall Street estimates, laying out a blueprint for how the athletic giant could cope with the coronavirus pandemic worldwide.

The company posted revenue of US$10.1 billion for the three months ended Feb. 29, compared with analysts’ projections of US$9.6 billion. Earnings amounted to 53 cents a share, matching estimates.

With hundreds of millions of people around the globe in various forms of lockdown, Nike may have an opportunity to accelerate its conversion of customers from brick-and-mortar shopping to digital. E-commerce sales, already a major priority for Nike, were up 35 per cent last year to US$3.8 billion. In the latest quarter, they rose even faster, at 36 per cent.

Nike’s results don’t give a full picture of the pandemic’s impact, since its fiscal third quarter only ran through February. But it’s one of the first big U.S. companies to deliver earnings after the Covid-19 virus hobbled economies around the world, shuttering factories and offices.

The company’s third quarter spanned a time when the coronavirus was either largely unknown, or heavily clustered in China. Nike said back in early February that the virus would have “material” impact on its business, and at one point 75 per cent of stores selling Nike in China were closed. Since then, the stores have begun to reopen.

Nike’s shares rose as much as 8.4 per cent to US$78.38 in extended trading. The stock had been down more than 28 per cent this year through Tuesday’s close, a steeper decline than the S&P 500 Index’s 24 per cent drop.

The sportswear company is expected to lower its expectations for the rest of the fiscal year, which will be hurt by stores that Nike recently closed in western Europe and North America. It previously said full-year sales would see low-double-digit percentage growth.