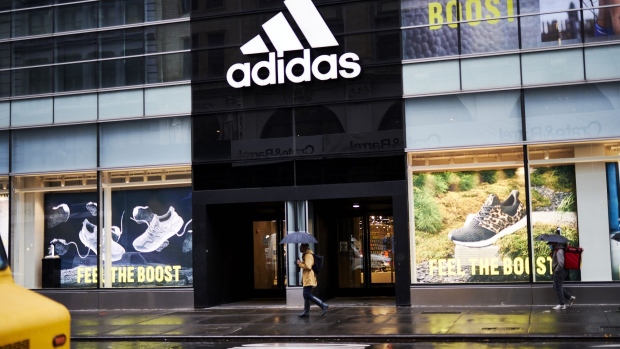 A pedestrian carrying an umbrella passes in front of an Adidas AG store in the SoHo neighborhood of New York, U.S., on Monday, Dec. 14, 2020. The U.S. Census Bureau is scheduled to release retail sales figures on December 16. Photographer: Gabby Jones/Bloomberg , Bloomberg

(Bloomberg) -- Nike Inc. is asking a U.S. trade agency to block imports of a wide range of Adidas AG Primeknit shoes, saying they copy the Oregon company’s patented inventions for a knitted fabric that reduces waste without any loss in performance.

The patents cover Nike’s FlyKnit technology, which uses specialized yarn from recycled and reclaimed materials to create a sock-like fit in the upper part of the shoe. Nike said it was the result of more than a decade of research -- almost all done in the U.S. -- and “represented the first major technology innovation in footwear uppers in decades.”

FlyKnit was first introduced before the 2012 London Olympics and has been adopted by “basketball great LeBron James, international soccer superstar Cristiano Ronaldo, and world record marathoner Eliud Kipchoge,” Nike said in the complaint.

Adidas and its related companies “have forgone independent innovation” and instead focused on efforts to invalidate the Nike patents for almost a decade, Nike contends.

“And while Adidas unsuccessfully challenged Nike’s patents, it continued to use Nike’s patented technology without permission,” Nike said in the complaint. “Nike is now forced to bring this action to defend its investments in innovation to protect its technology by halting Adidas’ unauthorized use.”

Adidas said it’s analyzing the complaint and “will defend ourselves against the allegations.”

“Our Primeknit technology resulted from years of dedicated research and shows our commitment to sustainability,” Mandy Nieber, an Adidas spokeswoman, said.

Several of Nike’s patents, including two of the six in the ITC complaint, have been the target of regulatory challenges by companies including Adidas. Nike said they were filed only because it refused to pledge not to sue the German company.

Nike has been aggressive in protecting its FlyKnit and other shoe inventions. A lawsuit against Puma SE settled in January 2020 and ones against Skechers USA Inc. settled in November.

The U.S. trade agency is a popular forum for companies looking to derail rivals in the world’s biggest market. The commission works more quickly than most courts, with final decisions typically in 15 to 18 months. Not only can it block products at the U.S. border, it can halt sales of products already brought into the country, an order that’s harder to get in district court.

The case is In the Matter of Knitted Footwear, 337-3580, U.S. International Trade Commission (Washington)