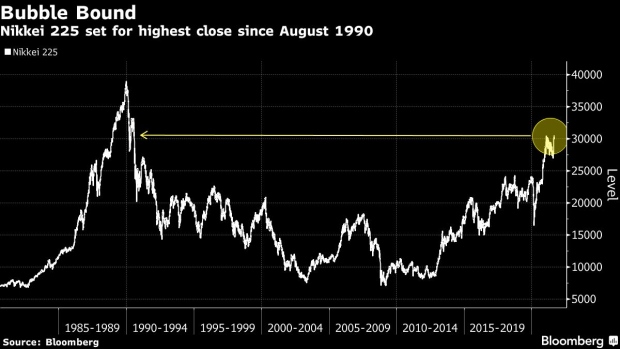 The Tokyo Stock Exchange (TSE), operated by Japan Exchange Group Inc. (JPX), in Tokyo, Japan, on Tuesday, Sept. 7, 2021. The Nikkei 225 Stock Average touched a level above 30,000 for the first time since April as a reshuffle of the blue-chip gauge added to a wave of positive sentiment on Japanese equities. , Bloomberg

SoftBank Group Corp. and Tokyo Electron Ltd. were the largest contributors to a 0.5% climb in the Nikkei 225, which rose to as high as 30,600.33. Automakers gave the biggest boost to the broader Topix, which advanced 0.3%. Both measures climbed for a third day, pushing the Nikkei 225’s gain for the year to 11% and the Topix’s advance to 17%.