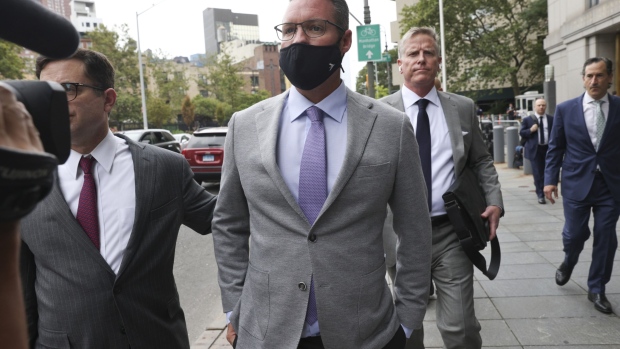 Nikola Corp. founder and former chairman Trevor Milton has been charged by prosecutors with making false statements to investors in the electric-vehicle startup. The charges follow a difficult year for the company, which went public and almost immediately faced questions about its production and technology.

Milton, 39, who stepped down from the company last year, is charged with misleading investors from November 2019 until around September 2020, according to a criminal indictment unsealed Thursday by federal prosecutors in New York. He voluntarily surrendered to federal custody and was freed by a judge on US$100 million bail after pleading not guilty. The bail was secured by a 2,700-acre ranch in Utah owned by Milton, who promised to limit his travel and not to contact investors.

Trevor Milton, founder of Nikola Corp., center, exits federal court in New York, U.S., on Thursday, July 29, 2021. Milton is charged with misleading investors from November 2019 until around September 2020 about the development of Nikola’s products and technology, according to an indictment unsealed Thursday by federal prosecutors in N.Y.

“In order to drive investor demand for Nikola stock, Milton lied about nearly every aspect of the business,” U.S. Attorney for the Southern District of New York Audrey Strauss said in a press conference.

In a separate complaint filed Thursday, the Securities and Exchange Commission said, “Milton sold a version of Nikola not as it was -- an early-stage company with a novel idea to commercialize yet-to-be proven products and technology -- but rather as a trail-blazing company that had already achieved many groundbreaking and game-changing milestones.”

“Trevor Milton is innocent,” his lawyers said in a statement. “This is a new low in the government’s efforts to criminalize lawful business conduct. Every executive in America should be horrified.”

That Milton would plead not guilty despite his company already publishing its own investigation and findings of misstatements is not a surprise. Over the course of 2020, Milton spoke freely about the company’s share price, and his predictions for the startup over the course of 2020 helped put SPACs back on the map.

Social-media use was a mainstay of Milton’s tenure. After a short seller’s report in September, he issued a long series of Instagram posts berating the author and other critics of the company. He appealed to investors in an Instagram video to exercise warrants. Milton was often combative on Twitter with those who questioned his statements and the company’s potential, before deleting his social media accounts on Sept. 23.

Nikola said in a statement that it has cooperated with the investigation. “Today’s government actions are against Mr. Milton individually, and not against the company,” it said.

Nikola’s sudden rise and dramatic fall kicked off a trend. Other startups including Lordstown Motors Corp. and Canoo Inc. have gone down similar paths, merging with special purpose acquisition companies and then struggling to hold up to scrutiny after going public.

Nikola went public through a reverse merger with a blank-check company in June, in a deal that made Milton into a billionaire several times over. At one point, the company’s shares ballooned to almost US$80 apiece, giving it a market capitalization greater than Ford Motor Co. despite not generating any meaningful revenue. 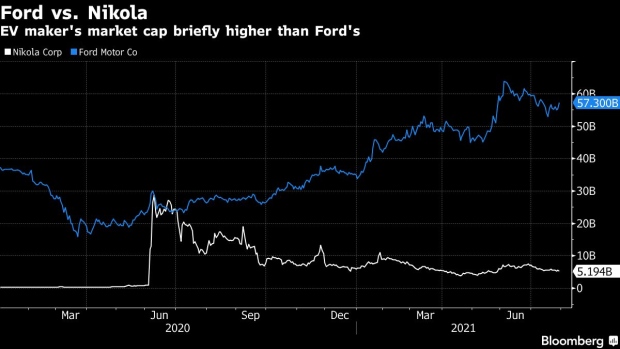 Days after the startup’s shares debuted, Bloomberg News reported that Milton had exaggerated the capability of the company’s debut truck, the Nikola One. That story got the attention of an activist investor at Hindenburg Research, which published a detailed report in September accusing Milton and Nikola of deception.

Nikola initially denied the claims by Hindenburg, which was betting against its shares. But Milton resigned later that month, and in February the company said an internal review of claims about its technology concluded the startup and its founder made several inaccurate statements. Hindenburg congratulated investigators for holding Milton accountable for his statements in a tweet after he was charged.

The fallout from the accusations has forced Nikola to curtail its ambitions. A deal with General Motors Co. to build a pickup collapsed, and an electric garbage truck program with Republic Services Inc. was cancelled.

Nikola’s market capitalization has plunged from almost US$29 billion in June last year to about US$5 billion currently. Milton is the company’s largest shareholder with stake of around 20 per cent of the company directly, according to data compiled by Bloomberg. He also owns additional shares through a joint entity called T&M Residual with Mark Russell, Nikola’s current Chief Executive Officer.

The SEC says Milton was “intensely focused” on the company’s stock price, calling and texting senior executives to “do something” on days when the shares were falling. He also “tracked the daily number of new Robinhood users who held Nikola stock,” according to the complaint.

Gurbir Grewal, the SEC’s head of enforcement, said Thursday the case was about the obligations of corporate officers to provide complete and accurate information about their companies’ operations. “Corporate officers cannot say whatever they want on social media in violation of federal securities laws,” he said.

Around the time of the merger, Milton tweeted about a battery-powered pickup called the Badger -- a truck the company had said in regulatory filings may not make it to production because it lacked a manufacturing partner. Milton also used his social media presence and appearances in interviews to announce new initiatives and changes, before informing the company, the SEC alleges.

“For example, on June 25, 2020, Milton sent a series of tweets from his personal account in which he claimed that Nikola would offer a drinking fountain in the Badger. This information came as a complete surprise to Nikola’s designers, engineers, and marketing personnel. When informed of the tweets, one engineer questioned whether ‘this [is] a joke,’ a marketing employee wrote that his ‘head is fuzzy,’ and a designer texted, ‘[u]hhhhh what.’”

Among the false and misleading statements Milton made, according to the federal indictment:

That the company had a “fully functioning” semi-truck prototype known as the Nikola One, despite the fact that Milton knew that the prototype was inoperable

That Nikola had engineered and built an electric- and hydrogen-powered pickup truck, the Badger, from the “ground up” using Nikola’s parts and technology, which he knew was not true

That Nikola was producing hydrogen and was doing so at a reduced cost, when “no hydrogen was being produced at all by Nikola, at any cost”

That Nikola had developed batteries and other important components in-house, when they were buying them from third parties

That reservations for Nikola’s vehicles were binding orders representing billions in revenue, when they were actually able to be canceled at any time, “and were for a truck Nikola had no intent to produce in the near-term”

Beyond Nikola’s technology, Milton and other executives’ statements contained discrepancies and exaggerations about the company’s progress toward production.

In July 2020, Milton tweeted that construction would start on the company’s Coolidge, Arizona, plant just days after groundbreaking. This followed a comment by Mark Duchesne, Nikola’s head of global manufacturing, who told reporters on July 22 that construction would start the following day. However, this would not have been possible because Nikola only held a “temporary use” permit that allowed for limited ground clearing and safety measures to facilitate the groundbreaking event. It did not have the required permits to start construction, Bloomberg reported.

In a similar stretching of words, Milton told a podcast that month that its European partner Iveco was already producing vehicle prototypes that were “coming off the assembly line right now in Ulm, Germany.” This was echoed by the company’s chief executive officer Russell on an Aug. 4 on an earnings call where he stated that the prototypes were “coming off the end of the facility at this point.”

While prototypes were being made in Germany, Bloomberg reported in September that the assembly line was not in fact operable and the facility was still under construction, two months after Milton’s original statement. The prototypes were being built by hand in a nearby workshop on the site, not on the assembly line. On Thursday, Nikola sent out an invitation to its opening ceremony for the Ulm facility on Sept. 15.

Nikola was among the first EV startups that attracted attention from investors last year as possible rivals to market leader Tesla Inc., but not the last to draw scrutiny from regulators.

Lordstown’s boasts about non-binding orders gave way to another attack by Hindenburg Research, which leveled accusations similar to the ones aimed at Nikola -- that Lordstown had misled investors. Its founder stepped down in June, and the company confirmed this month that it is being probed by the Justice Department and the SEC.

Canoo rattled the market in March by announcing a hard pivot in its business plans to de-emphasize parts of its original pitch to investors. Its co-founder and CEO resigned in April, and in May the company disclosed an SEC investigation.