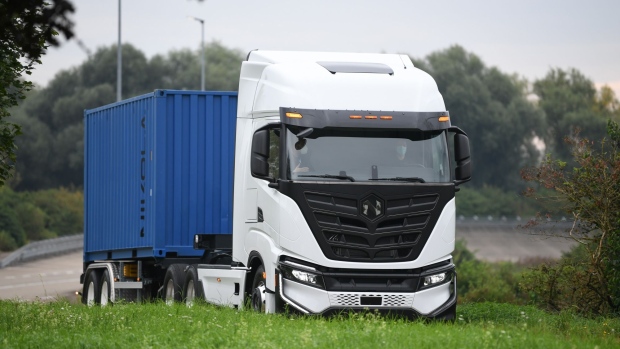 (Bloomberg) -- Nikola Corp. reported its first meaningful revenue and said it’s on track to deliver as many as 500 electric big rigs to customers this year, even as the company continues to grapple with sluggish production.

Sales in the second quarter were $18.1 million, the Phoenix-based company said Thursday in a statement, beating analysts’ expectations. Nikola also reported a narrower-than-expected loss of 25 cents a share.

The company built 50 battery-electric semis in the quarter, the low end of its prior guidance of as many as 60. It also delivered 48 to dealers, missing its own forecast.

Nikola’s shares rose 2.7% in premarket trading as of 9:05 a.m. in New York. The stock declined 24% this year through Wednesday’s close, but has recovered in recent weeks from a June low of $4.72.

The startup sees itself as a leader in clean-energy heavy vehicles in a high-potential field for zero emissions trucks that includes other aspirants such as Tesla Inc. and legacy players like Volvo AB. At the same time, Nikola has been trying to repair its reputation after paying a $125 million penalty to US regulators for allegedly misleading investors and dealing with the delayed launch of a battery-electric truck.

The company also announced the location of three hydrogen-fueling stations in California, a launch market for its fuel-cell powered trucks. The sites are in Colton, Ontario and a location servicing the Port of Long Beach. Nikola has long held plans to build a nationwide series of stations for FCEV semis. However, it’s encountered multiple hurdles in breaking ground and confirming sites, despite agreements with corporate partners.

Nikola ended the quarter with $529.2 million of cash and restricted cash on its balance sheet. The company also has the ability to call on $312.5 million from an equity-line-of-credit agreement it has with Tumim Stone Capital.

On Tuesday, shareholders approved the issuance of new shares to potentially allow the company to raise capital. That vote had been postponed several times as retail investors, which are a sizeable slice of the investor base, failed to submit their proxy votes.

The startup began generating its own funds after initiating production of trucks it could actually sell in March, with revenue from those vehicles now showing up in the company’s earnings statement.

Trevor Milton, Nikola’s founder and former executive chairman, goes on trial next month to face charges of allegedly making false and misleading statements about the company’s technological capability and business prospects when he was at the helm. He resigned from Nikola in 2020 and was subpoenaed as part of an investigation by the Department of Justice.