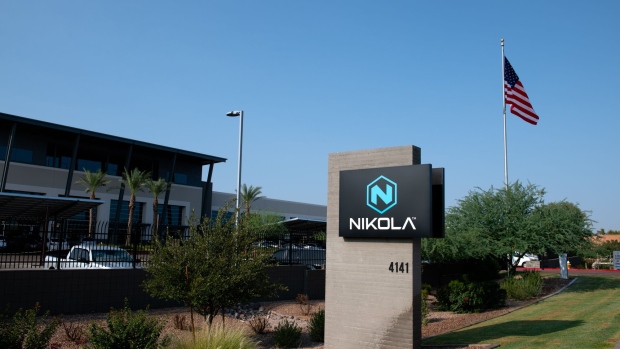 Signage is displayed outside Nikola Corp. headquarters in Phoenix, Arizona, U.S., on Tuesday, Sept. 15, 2020. Nikola Corp. shares fell as much as 10.4%, resuming its decline as investors reacted to word of a U.S. Securities and Exchange Commission investigation into allegations it deceived investors about its prospects. Photographer: Ash Ponders/Bloomberg , Bloomberg

(Bloomberg) -- Nikola Corp. fell in New York premarket trading Wednesday after the Financial Times reported the U.S. Department of Justice has joined inquiries into claims against the truckmaker in a short seller’s report.

Bloomberg reported Monday the U.S. Securities and Exchange Commission is looking into the allegations of fraud Hindenburg made against Nikola. The Department of Justice has also been making inquiries on the matter, the Financial Times reported Tuesday, citing unidentified people familiar with the conversations.

The stock has been volatile recently, following an announcement Sept. 8 of an equity and manufacturing deal with General Motors Co. and the short-seller’s accusation of “deception.” Nikola has pushed back on the allegations, accusing the short seller of making misleading statements that were designed to manipulate its shares.

Investors are focusing too much on Nikola’s past, as its fortunes depend more on a longer-term goal of becoming the preeminent supplier of hydrogen for fleets of vehicles, Jeffrey Ubben, a top shareholder and board member at the firm, said in a phone interview Tuesday.