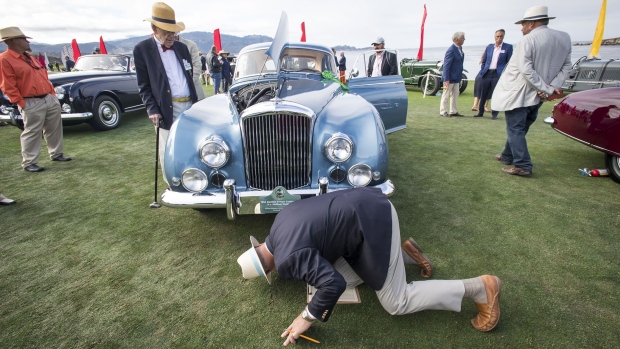 Judges view a 1954 BentleyMotors Ltd. R-Type Continental during the Pebble Beach Concours d'Elegance on Aug. 18, 2019. More than 20,000 car enthusiasts gathered for the Pebble Beach Concours, where total auction sales totalled more than US$300 million this year. Collectors like these value period-correct restoration, historic provenance, and racing history above all else. Bloomberg/David Paul Morris

Earlier this month, US$244.1 million worth of cars sold at the auctions held annually in Scottsdale, Ariz.

A total of 574 vehicles changed hands during the 10-day event, including the original Ferrari 275 GTB prototype and the top-priced, US$3.2 million 1995 Ferrari F50 sold by Gooding & Co. The week’s biggest lesson, according to the final analysis report by Hagerty.com, was that rare, finely presented cars sold well while bidders tended to pass, as you might expect, on common vehicles with visible needs.

In fact, the average sale price in Scottsdale was US$81,534, down slightly from 2019. The dip indicates that, while enthusiasts and collectors may be as affluent as ever, they’re also more cautious than in previous years.

If you’re selling your own vintage auto this year, there are some simple things you can do to capitalize on the wealth and all-time interest in car culture while avoiding the pratfalls of used-car malaise. Here are nine common mistakes people make when they try to sell their collectible car.

You price it emotionally

We get it — the car was your baby, and you put a lot of money into making it just so. Maybe you rebuilt the engine. Maybe you upgraded the suspension and redid the interior. But the hard truth is you can’t put all that on the car buyer. It just doesn’t cut it to say, “I paid X for the car but am XY into it, so you have to pay me that much.”

“Overpricing the car by five per cent will leave it in your garage,” says Carl Bomstead, the senior market analyst for Sports Car Market, a valuation guide and newsletter for car collectors and enthusiasts. He joined Donald Osborne, who appears regularly as an automotive expert on Jay Leno’s Garage; Steve Serio, a longtime auto dealer and Aston Martin specialist; and Keith Martin, who publishes Sports Car Market, on a panel discussion on Jan. 16 in Scottsdale. The focus was on the best ways to sell valuable cars.

By the same token: Each car is unique, even those that share the same make and model. So, just because a similar specimen sells for a certain amount at auction, or on Bring a Trailer, it doesn’t mean yours is worth that much.

“The minute the auction house puts the price down, it’s obsolete,” says Serio. “Markets shift really quickly now — you have to stay on top of every single thing.”

Differences big and small between any two given cars will always abound and will always affect value. You should do a hard evaluation on your car of such things as mileage; the number of previous owners (the fewer the better); the amount of maintenance and repair; the purity and thoroughness of its record-keeping; racing history; the level of restoration (or lack thereof); the geography of the car’s whereabouts; the quality of its storage (inside, outside, climate-controlled?); and the rarity of its color (stock or exclusive paint-to-sample order?) — and then price accordingly. Those factors will make all the difference.

You don’t prep the car before the test drive

This should be common sense: Remove the child’s seat from the back, wipe out the ashtrays, and vacuum under all the seats. Make sure the car is out of the garage, pointed toward the open road, and starts without a problem before the prospective buyer gets there.

“The car really needs to sparkle,” Bomstead says. “Give people a reason to buy, not a reason to walk away.”

Make sure whoever looks at your car has the best drive of their life, so they’ll remember it and want to re-create the feeling by buying the car. It’s even worth warming up the engine to help enable a flawless test drive. You’d be surprised how often that doesn’t happen.

“Put a decent radio station on,” Martin says. “Present the car properly right from the start, and it’ll pay off.”

You don’t fix the easy stuff

If there’s something on the car that you can fix before selling, fix it. It will be worth the effort. That means the leaky windshield washer hoses and the lock that doesn’t work. And you should repair the broken seat belt and the fritzy radio, too. It makes the car look like you’ve cared for it, that you’ve maintained it consistently, constantly, and confidently with pride of ownership.

If you’re the one doing the buying, be sure to ask, “Is there anything on the car that doesn’t work right now?” Don’t forget that, ultimately, caveat emptor rules: It’s your responsibility to ask that question and protect yourself from anything the seller decides not to divulge.

For special cars like vintage Ferraris and Aston Martins and Jaguars and Porsches, it matters a great deal who did the repair, maintenance, and/or restoration work on the vehicle. Only a small number of garages in the world are qualified to do even the smallest repairs on Ferrari 250s, Jaguar E-Types, and other blue-chip vehicles. Make sure you choose the right mechanic, restorer, or painter — and document each visit. Even the most minor work can make the difference between a discerning, well-heeled collector buying your car or passing on it.

“The name matters,” says Martin. “Unless the engine was rebuilt by a name of someone I recognize, I’m going to have to rebuild the engine. So have good paperwork and known restorers, and be ready to show that.”

You ‘lock and walk’

This applies to people selling their car at a concours or rally or swap meet — or even advertising it at the local “cars and coffee” gathering. It will go much easier if you stick near the vehicle offering friendly greetings to potential buyers, rather than simply locking the doors and disappearing for the rest of the event. Don’t make people track you down. Nobody likes trying to negotiate with a ghost.

You don’t have a takeaway

It takes little effort to print off a quick list of your car’s high points. Include things like the year, make, model, engine type, miles, paint color, transmission, and performance details. Keep a stack of the printouts handy so you can pass them out. That way, whether you’re displaying your vehicle at a public venue or simply in your driveway, people will walk away with a reminder — a tangible, powerful prompt for later, when they’re lying in bed contemplating, possibly even lusting after, your car.

You’re in a rush

It’s Selling 101: Never come into a negotiation from a position of desperation. If you’ve got to sell your car today or even tomorrow or next week, it’s already too late. Experts advise it can take as long as six months for a good car to sell for a fair price, so plan accordingly.

“If you seem desperate, the smell of desperation will waft off you like a bad hamburger you just ate,” Serio says.

Successfully selling a car is an art form of subtleties, posturing, and sussing out the other guy. Kind of like a boxing match. You have to pick your timing and lead with a good punch — maybe a sucker punch, if that’s what it takes. Being rushed will mean you don’t see the big picture of the transaction. Set your fair price for the car and let the buyer come up to meet it; don’t make him fish around for what he thinks it’s worth.

And remember: Situations change. People come into and out of cash as they juggle their own collections and garages at home. Someone who was unable to meet your price last week could return next month under different circumstances.

If you’re selling your ride online, it’ll behoove you to stay on top of the comments section. Everyone knows how bad online trolling can get—even and especially in the world of car guys, where everyone deems himself an expert.

“The problem with Bring a Trailer is there are a lot of shut-in, miserable trolls who comment [on listings],” says Serio, who’s bought and sold more than 50 vehicles on the online platform. A personal grudge or gripe against a certain marque or model, or even an anecdotal story that doesn’t apply to anything based in reality, could affect the online perception of your car. “It can be a lot of fake news,” he says. “As a seller, you have to dismantle these people very carefully. You have to wade through it. You have to police your own listing. Be careful — they can destroy you.”

You’re being a pig

Tell the truth about the condition of the car. If it needs an engine overhaul, say that. If it needs a steering column replacement, say that as well. If the brakes are on their last legs, admit it. It’ll save you time and grief later on — the truth will always come out, and it’s better to get ahead of it before you end up with an angry buyer on your hands.

Further: Tempted to quibble over the last US$1,000 some guy is trying to pull on you? If you like him, let him have it. The good car-ma (har har) will come back to you tenfold.

And finally: Lighten up a bit. This isn’t brain surgery — it’s cars. Have some fun with it.