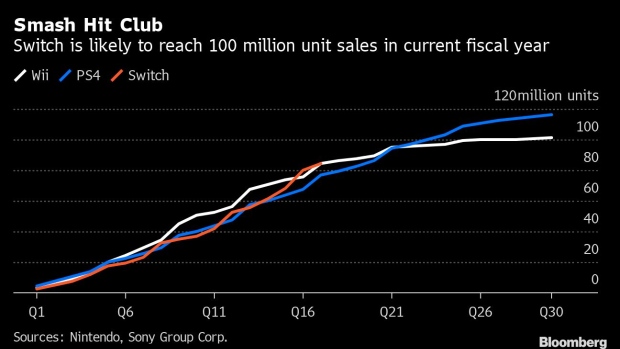 (Bloomberg) -- Nintendo Co.’s decision to increase the price of its Switch console with an updated model set for October will test new waters for console makers, who have traditionally sought to juice sales by slashing prices instead of raising them.

The coronavirus outbreak reconfigured expectations across the gaming industry, with companies like Nintendo, Sony Group Corp. and Microsoft Corp. all struggling to satisfy runaway demand from players seeking entertainment and escape. The two Japanese gaming giants reported record profits, downloads and subscriber numbers over the past year.

Now Nintendo is betting this momentum can be sustained with a new $350 model, a jump from the standard model’s original $300 price tag and a repudiation of traditional console economics. In an industry where consoles typically get mid-life price cuts, the Switch is moving into a higher tier -- largely on the strength of a larger and better OLED display and some added storage. The upgrades are estimated to cost around $10 more per unit, meaning Nintendo is improving profit margins and relying on its rich library of games to keep sales brisk.

Prices for existing consoles have so far only gone up with the launch of more powerful editions, such as the PlayStation 4 Pro and Xbox One X. Nintendo’s updated model makes no such performance improvements.

The new Switch’s 7-inch OLED display from Samsung Display Co. costs an additional $3 to $5 per unit, according to Yoshio Tamura, co-founder of industry research firm DSCC. Increasing the internal storage to 64GB is a further $3.50, according to Omdia’s Akira Minamikawa. The other added components, such as the new console stand and LAN port, are thought to add a few dollars more. Nintendo has been selling the Switch at a profit since its launch.

The conventional cost model for consoles is to start selling them at a loss in order to secure wide adoption and to recoup that investment through software sales and improvements in manufacturing efficiency over time. Sony’s PlayStation 3, 4 and 5 all started life that way.

Should Nintendo’s change in strategy boost Switch sales momentum even with the price hike, it could set a precedent for charging more across the industry, said Ace Research Institute analyst Hideki Yasuda.

Sony could have priced its latest PlayStation generation higher, as demand for the PS5 has far outstripped supply and it’s traded on resale markets at double its retail price. The company is now closely monitoring the market response to Nintendo’s latest, according to an official inside the PlayStation division who didn’t want to be named as they’re not authorized to discuss competing companies.

Investors have so far taken a negative view of the new hardware and its pricing, with company shares down roughly 5% since the announcement last week. Analyst reactions have been polarized.

“Nintendo failed to provide enough added value to justify a $50 bump in the new hardware,” Morningstar’s head of equity research Kazunori Ito said. “The new hardware is barely half-baked and would do no help at all in sustaining the platform’s momentum. The Switch had its peak last year and is only going to slow down from here.”

Other industry observers disagree. Serkan Toto, an independent consultant for game companies, said the new model’s improved display is good enough to “squeeze $50 more out of consumers” given how popular the console has been. The Switch remains on track to surpass 100 million lifetime sales in the current fiscal year.

“I don’t see any reason why this model would flop,” Toto said. “Nintendo raised the new model’s price as it doesn’t need to cut prices for current models thanks to strong demand.”

Nintendo’s domestic market, which provides 23% of the company’s revenue, has historically seen console prices declining rather than growing. Moreover, with the pandemic’s effects on Nintendo’s key markets ebbing away, demand for its products can be expected to begin tapering off.

“Nintendo made a real bold decision because it’s obvious that people would spend more on services and less on goods going forward,” Sony Financial Holdings senior economist Takayuki Miyajima said. “From a macroeconomic viewpoint, the move couldn’t be made if they have even a slight concern on how well the console would do.”