With few attractive titles for the holiday shopping season and shipments on track to fall short of the company’s targets, doubts are growing whether Nintendo Co.’s (NTDOY.PK) Switch can ever become a mass-market product.

When the device debuted last year as a hybrid console that could be carried around, it was classic Nintendo — a new gadget that broke the norms of conventional video games. Equipped with a built-in screen and hypersensitive controllers, the Switch was billed as a worthy successor to the Wii, Nintendo’s rule-breaking blockbuster console.

The goal was to make the gaming experience as seamless as possible, while letting people use the product in new ways, such as turning it into a virtual piano or motorcycle. But so far, the Switch has struggled to find customers beyond a core fan base. The Switch is on track to reach 35 million unit shipments by March, according to the average of eight analysts’ estimates compiled by Bloomberg, short of Nintendo’s target of 38 million.

After cramming its best franchises — Super Mario, Zelda and Splatoon — into the first 12 months, the Kyoto-based company was left with fewer games to show off in the second year, hurting hardware sales. Cardboard accessories introduced in April, called Nintendo Labo, have mostly failed to expand interest beyond those who were already planning to pick up a Switch.

“All great consoles need a great second year, and Nintendo hasn’t delivered one for the Switch,” said Cornelio Ash, an analyst at William O’Neil & Co. in Los Angeles. “Investors thought over five years they could sell maybe 90 million units. But after this year, that’s looking pretty much impossible.”

Nintendo declined to comment on the forecast or plans for the Switch, and representatives pointed to recent comments by executives saying that it’s too early to evaluate performance for the second year, and that the company is sticking by its forecast. 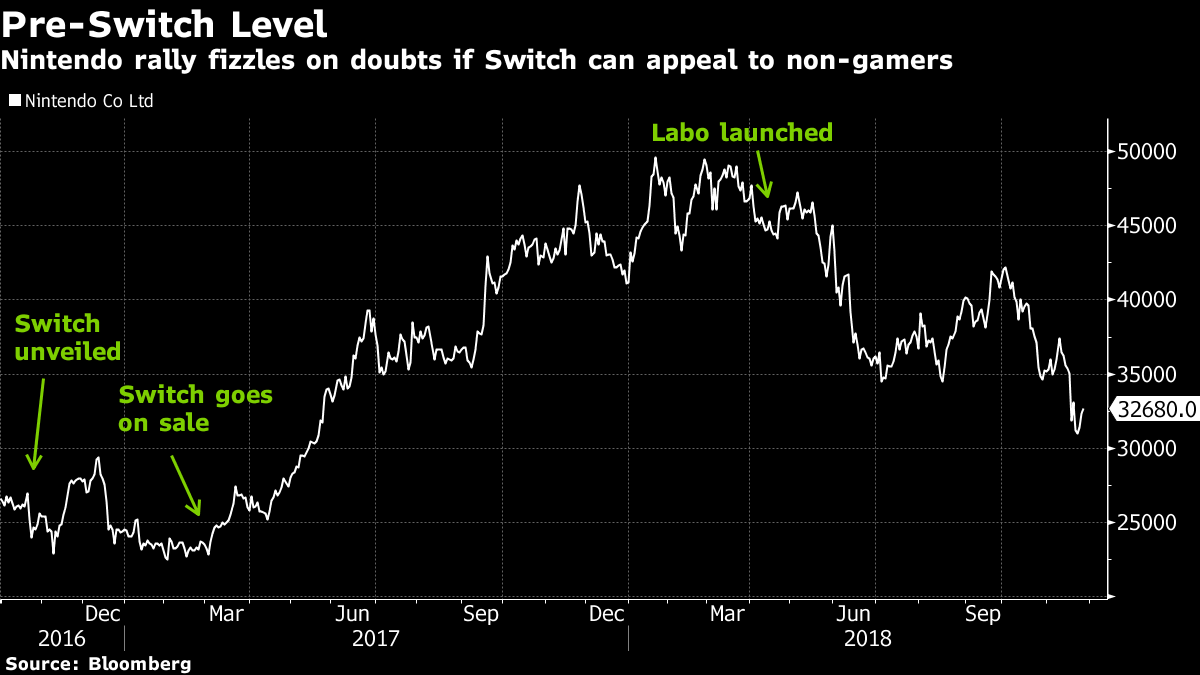 The holiday quarter historically accounts for about half of the game maker’s sales, and analysts have been reducing their full-year estimates for operating profit and revenue since March. Nintendo shares have dropped 34 per cent since a January peak, wiping out US$21 billion in market value. The drop was initially driven by short-selling hedge funds, but recent declines have been fueled by existing shareholders, according to data from Markit Securities.

“The stock is heading back to the level when the Switch was announced, which doesn’t say great things about its long-term prospects,” Ash said.

Even so, 20 out of 23 analysts tracked by Bloomberg continue to recommend buying the stock.

This year’s biggest disappointment has been Nintendo Labo, the cardboard add-ons that transform the Switch into playable objects. Like the Wii, they were designed to appeal to non gamers to broaden the device’s customers beyond core fans. But sales have struggled. Last month, Nintendo President Shuntaro Furukawa told reporters in Osaka that “it will take time” to see if the product delivers.

“2018 was a reality check and brought lofty expectations back down to Earth,” said Michael Pachter, an analyst at Wedbush Securities Inc. “The Switch is great, but is still primarily a handheld, and a very expensive one.”

That opens the possibility of price cuts. History suggests reductions will have to be aggressive in order to work. Sales of the 3DS picked up only after prices were slashed by 40 per cent five months after launch, but the Wii U didn’t recover even after Nintendo dropped the price by about 15 per cent within a year after release.

“I don’t see sales growing unless the price is reduced to below US$200,” Pachter said, indicating a 33 per cent cut from the Switch’s current price.

While a lower price sticker would help boost Switch sales, it may further depress sales of the 3DS. Ever since the Switch was announced, analysts have expressed concern that it will cannibalize sales of Nintendo’s other portable gaming device. Those fears have been borne out, with total 3DS revenue down by almost two-thirds this fiscal year.

Another possibility is the introduction of different hardware versions, such as one designed for children. Credit Suisse Group AG sees “a strong likelihood” that new Switch models will go on sale as soon as next year. “Any announcement to this effect would likely come before mid-2019, possibly as early as the management policy briefing scheduled at end-January,” analysts including Hanako Takahashi wrote in a report last week.

Apart from potential price cuts and new models, the other key to regaining momentum will be new games. Nintendo is planning big releases next year, including a new Animal Crossing game, a Pokemon title and the latest installment of its Metroid series. Whether that can broaden the install base beyond core gamers remains to be seen. Tellingly, executives have stopped comparing the Switch to the Wii during investor meetings in recent months.

If Nintendo posts a weak holiday quarter or Switch shipments show that it will probably miss the fiscal-year target, executives will face tough questions on how they plan to regain lost momentum. That could open up possibilities for bigger changes to the platform next year.

“The Switch excitement has rapidly declined, ” Ash said. “Unless there’s significant change or something else new, the Switch story has been exhausted.”

--With assistance from Yuki Furukawa and Kurt Schussler