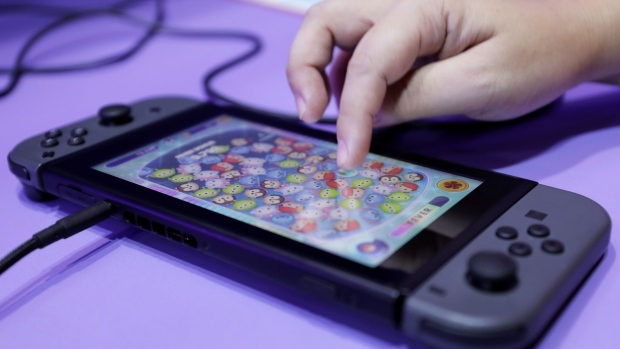 An attendant uses a Nintendo Co. Switch game console to demonstrate the Disney Tsum Tsum Festival video game in the Bandai Namco Entertainment Inc. booth at the Tokyo Game Show 2019 in Chiba, Japan, on Thursday, Sept. 12, 2019. Over 650 companies and groups are exhibiting at the annual game show, which runs through Sept. 15. Photographer: Kiyoshi Ota/Bloomberg , Bloomberg

Nintendo Co. plans to adopt an upgraded Nvidia Corp. chip with better graphics and processing for a new Switch model planned for the year-end shopping season, according to people familiar with the matter.

The new Switch iteration will support Nvidia’s Deep Learning Super Sampling, or DLSS, a novel rendering technology that uses artificial intelligence to deliver higher-fidelity graphics more efficiently. That will allow the console, which is also set for an OLED display upgrade, to reproduce game visuals at 4K quality when plugged into a TV, said the people, who asked not to be identified because the plan is not public.

The U.S. company’s new chipset will also bring a better CPU and increased memory. DLSS support will require new code to be added to games, so it’ll primarily be used to improve graphics on upcoming titles, said the people, including multiple game developers. Bloomberg News previously reported that the new Switch is likely to include a 7-inch OLED screen from Samsung Display Co. and couple the console’s release with a bounty of new games.

Nintendo’s Switch games release calendar remains mostly empty for the latter half of the year, though the company announced Tuesday a new partnership with Niantic Inc. on augmented-reality smartphone apps, set to commence with a Pikmin app in 2021.

Analysts expect the new Switch will be offered at a higher price than the current model’s US$299, a level unchanged since the Switch’s initial release in 2017. Bloomberg Intelligence’s Matthew Kanterman foresees an increase of as much as US$100.

“US$349.99 will increase the value proposition of the device, but I still think Nintendo can drive strong demand even at US$399.99,” he said.

DLSS was first introduced as an image upscaling feature in 2018 and remains exclusive to Nvidia graphics cards. It’s an atypically advanced addition for Kyoto-based Nintendo, which has tended to opt for more mature and lower-cost technology than rivals Sony Corp. and Microsoft Corp. adopt with their consoles. The new Switch will still lag the overall performance capabilities of its pricier rivals.

“What we value is how much a new technology contributes to the fun experience, and how comfortably a consumer can play,” Nintendo Senior Executive Officer Ko Shiota said last year.