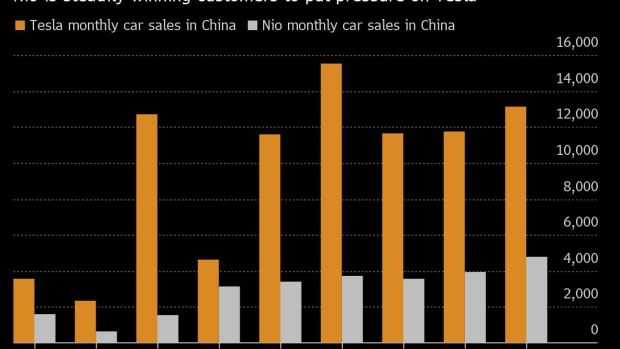 (Bloomberg) -- A year ago, Nio Inc.’s dwindling cash and sputtering sales had the electric-car upstart on the brink of doom. Fast forward, and the stock’s 11-fold gain in 2020 has pushed the Chinese company’s market value past General Motors Co.

No other company better illustrates the swift shift in consumer and investor perception of electric cars than Nio. Skepticism over the technology’s viability has turned into a race to pick the winners, with Nio and main rival Tesla Inc. among the top candidates.

With China’s electric-car market expected to expand rapidly over the coming years, investors are betting that Nio will thrive even as competition intensifies. Yet success is far from guaranteed: Nio’s sales volumes are still minuscule compared with bigger auto-industry rivals, the company has never turned a profit as development and marketing costs rise, and price pressure is getting tougher.

“Another wave of price cuts for premium electric vehicles in China may be on the horizon, stirring up what could be an intense rivalry,” Bloomberg Intelligence analysts led by Steve Man said in a Nov. 11 report.

While design is as crucial for electric cars as it is for conventional autos, additional factors can weigh on success, such as driving range, ease of charging, and total cost of ownership. Nio is using flashy showrooms to lure buyers and offers an attractive package that’s winning over early fans in China, its sole market for now.

The starting price for a Nio ES6 SUV is about $54,000, more than a third higher than that of Tesla’s popular Model 3 sedan. But Nio has been innovating with battery options, offering services such as leasing and upgrades, which bring down the cost of owning a Nio over the years. The company also operates battery-swap stations and has a fleet of charging cars to assist drivers at other locations.

While Shanghai-based Nio trails Tesla in sales volumes, it’s been catching up. Its monthly sales rose past 5,000 for the first time in October, while Tesla registrations in China have steadily hovered at around 11,000-12,000 units for the past few months, according to data from state-backed China Automotive Information Net. Tesla doesn’t report monthly sales figures for China.

“Our cars sold at an average price higher than we expected and orders for our cars are very good as well,” Nio Chief Executive Officer William Li told reporters this month in Beijing. “There is a clear differentiation in branding between” Nio and Tesla.

Nio is also expanding its lineup, recently starting deliveries of an SUV coupe and planning to introduce a new model each year going forward. The company bolstered its development coffers with a $1 billion funding deal with a local municipality earlier this year, an arrangement that marked a turning point in its fortunes.

To be sure, competition is heating up. Tesla’s new Model Y compact SUV is set to vie directly with Nio. Warren Buffett-backed BYD Co. has more than quadrupled in Hong Kong trading this year as it’s rolled out new models. Great Wall Motor Co. has more than doubled as it stepped up electrification efforts, and Xpeng Inc. and Li Auto Inc. have soared after successful share-market debuts this year.

But China’s car market is expanding, easing the pressure on Nio and its peers as the coronavirus pandemic puts a damper on sales in Europe and the U.S. Auto sales have been rising for four straight months, following a two-year slump.