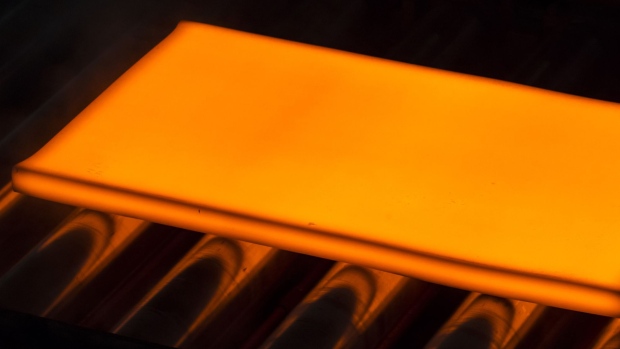 A hot steel slab moves along a conveyor of a plate mill at the Nippon Steel & Sumitomo Metal Corp. plant in Kashima, Ibaraki, Japan, on Wednesday, April 18, 2018. President Donald Trump and Japanese Prime Minister Shinzo Abe committed Wednesday to intensify bilateral trade talks. Trump is pushing for an agreement that would reduce the U.S. trade deficit with Japan, while Abe is seeking an exemption from the steel and aluminum tariffs that Trump announced last month. Photographer: Tomohiro Ohsumi/Bloomberg , Bloomberg

Nippon Steel Corp. and JFE Holdings Inc. are already spending a combined 172 billion yen ($1.3 billion) to lift output of so-called electrical steel used in EV motors, and are now looking to raise that further, according to interviews with senior executives.

“Considering the trajectory of the EV transition, it looks like supply will be insufficient,” Takahiro Mori, Nippon Steel’s executive vice president said in an interview. “Customers are asking us to increase the capacity, so additional steps are now under consideration.”

Nippon Steel is mulling expansion beyond 2024, when it’s due to complete a 50% increase in production capacity for electrical steels. JFE Holdings Inc. will consider further steps beyond a planned doubling of capacity by September 2024, Chief Financial Officer Masashi Terahata said in an interview. Further expansion will likely be needed, he said.

Electrical steels have enhanced magnetic properties and help limit energy loss in EV motors, and are also used in power-generation equipment and mobile phones. They’re joining a swathe of materials -- from nickel to rare earths and copper -- that are on the cusp of a long-term boost in demand due to the move away from fossil fuels.

There’s only a relatively small number of producers of electrical steels and there are significant barriers to entry, S&P Global Mobility said in a note in June. Supply is tightening, it said.

JFE will consider options including building a plant in North America or other regions where demand will be strong, Terahata said. Nippon Steel’s Mori said his company is also looking to expand outside of Japan, but the next investment is more likely to be domestic, to better safeguard the technology.

Japanese carmakers have been slower to adopt battery-powered vehicles than rivals in China and the West, but they are on the case. Toyota Motor Corp., the biggest overall customer for both Nippon and JFE Steel, wants to sell 3.5 million units a year by the end of this decade. A spokesperson at Toyota declined to comment.

“Rather than a straight line of growth, the material will be needed at a faster pace” and there could be a bottleneck, Bloomberg Intelligence analyst Tatsuo Yoshida said.