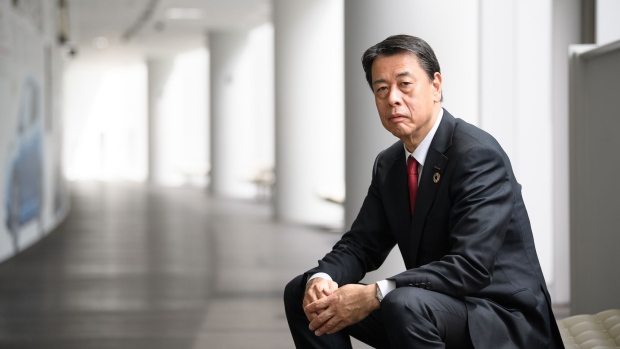 (Bloomberg) -- Nissan Motor Co. is unveiling plans for a second car-battery factory in as many months, betting that demand for electric vehicles will justify the investment in additional capacity.

Envision AESC and Nissan will jointly operate the plant, to be built in Ibaraki prefecture north of Tokyo with an initial investment of 50 billion yen ($456 million) and annual production capacity of six gigawatt-hours in 2023, according to a document seen by Bloomberg. The plans, to be announced Wednesday, include spending as much as 100 billion yen and boosting output to 18 gigawatt-hours after about five years, or roughly enough for 163,000 Nissan Leaf electric vehicles.

Why Building an Electric Car Is So Expensive, For Now: QuickTake

AESC used to be part of Nissan until 2018, when the Japanese automaker sold a majority stake in the electric-car battery business to Envision Group, a Shanghai-based sustainable-energy company. Nissan still owns 20% of AESC.Azusa Momose, a spokeswoman for Nissan, declined to comment on the plans but added: “We are not able to directly comment on Envision AESC’s plant in Ibaraki prefecture, but they are one of our key partners, as they are the battery supplier for Leaf vehicles for over 10 years and are planning to build a new battery plant in the U.K. adjacent to the Sunderland plant.”

However as Yokohama-based Nissan seeks to keep closer tabs on battery development and ensure access to the critical EV component, it’s now exploring ways to increase its stake or deepen its alliance with Envision AESC, a person with knowledge of the matter said.

Originally called Automotive Energy Supply Corp., the car-battery manufacturer was created in 2007 as a joint venture between Nissan and NEC Corp. as Nissan prepared to introduce the Leaf, which once commanded a sales lead before Tesla’s ascendancy.

Makoto Uchida, Nissan’s chief executive officer, said in a Bloomberg Television interview last month that the U.K. project was just the “start in our electrification strategy.” Nissan is planning to roll out a new EV called Ariya, although the flagship SUV’s debut was pushed back to the end of this year from an originally planned rollout of “mid-2021.” In an interview with Bloomberg Television on Tuesday, the CEO said he’s confident Nissan will keep up profits despite headwinds.

Envision Group is also expanding its own battery business, announcing plans to spend as much as 2 billion euros ($2.4 billion) on a plant in northern France to power EVs made by Renault SA, Nissan’s partner in a global automaking alliance with Mitsubishi Motors Corp.

Nissan and Envision AESC’s plans to build the Ibaraki plant was first reported by Japanese broadcaster NHK in May. Nissan Chief Operating Officer Ashwani Gupta will attend a groundbreaking ceremony for the factory on Wednesday, according to the document.