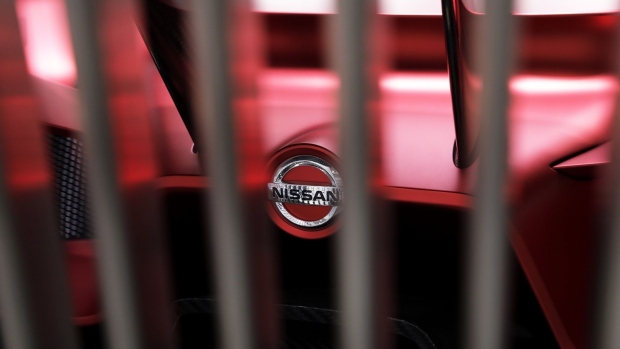 A livestream of Makoto Uchida, speaking during the company's AGM is shown on a laptop computer in Tokyo on June 29. , Bloomberg

Uchida, who took the helm of Nissan in December, said his goal is to reach positive cash flow during the latter half of the next fiscal year, or October 2021 through March 2022. Nissan is implementing a pay freeze for senior managers for at least six months as it seeks to turn the business around, he said.

Nissan is seeking to cut 300 billion yen (US$2.8 billion) in annual fixes costs and introduce new models to jump-start sales after reporting a 671 billion yen loss for the latest fiscal year, the first deficit in a decade and the biggest in 20 years.

The coronavirus pandemic has added to Nissan’s pain, following a turbulent year caused by the 2018 arrest of former chairman Carlos Ghosn. Nissan has enough funds to get through the crisis, Uchida said.

“I will put Nissan’s growth back on track,” Uchida said, adding that he was prepared to step down if he fails. “We will make the utmost effort to resume shareholder returns as soon as possible.”

The dividends are important for Renault SA, Nissan’s alliance partner of 20 years and 43 per cent shareholder, which relies on the cash to boost its own payouts. The French automaker is also cutting costs and dividends, as it weathers the downturn in global demand for automobiles.

Uchida emphasized the importance of the Japanese market, saying that the carmaker will introduce two electric-vehicle and four e-Power models by the end of 2023. “Boosting Nissan’s presence in the home market is critical,” he said.

As part of its overhaul, the carmaker is eliminating hundreds of jobs at its Sunderland plant in northeast England, and is shuttering its Barcelona factories. It’s also reducing about 400 jobs in Brazil and about 200 jobs in Mexico.

At the meeting held at its headquarters in Yokohama, Nissan reduced the number of seats to about 400 and kept them apart as part of precautionary measure to prevent the risk of infections. Attendees wore masks and hand sanitizers were prepared. The meeting was streamed online.