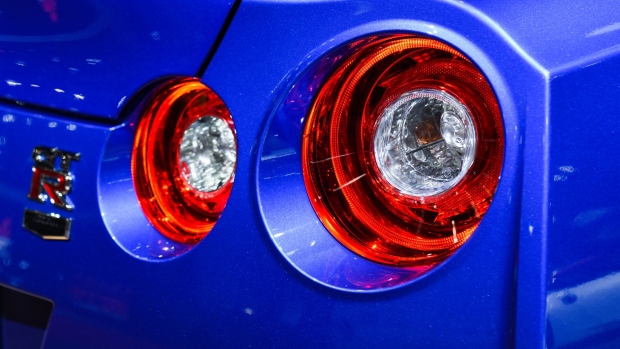 The rear tail lights of a Nissan Motor Co. GT-R sports vehicle 50th Anniversary Edition are seen at the Tokyo Motor Show in Tokyo, Japan, on Thursday, Oct. 24, 2019. From cars that can shape-shift to an entire living room on wheels, automakers are showing off their wildest ideas on the future of transport at this year's Tokyo Motor Show, which will run through Nov. 4. Photographer: Noriko Hayashi/Bloomberg , Bloomberg

(Bloomberg) -- Nissan Motor Co. shares fell as much as 10% --the most since July 2020-- after the company’s profit forecast for this fiscal year missed estimates, weighed down by the ongoing shortage of automotive semiconductors.

Nissan is targeting flat annual profit for the fiscal year through March 2022, short of the 133 billion yen ($1.2 billion) predicted by analysts. It finished out the recently ended fiscal year 2020 with a loss of 151 billion yen.

Although the Japanese automaker is seeing demand for its cars swiftly recover in the U.S. and China, rising material prices and a worsening chip shortage are hampering its ability to turn a profit for the current fiscal year, the Yokohama-based company said Tuesday.

Nissan Chief Executive Officer Makoto Uchida said he expects the chip shortage to impact about 500,000 units of output this year. Though the chip situation going forward “is still uncertain,” Nissan aims to recover about half of that lost output in the latter half of the fiscal year when the chip crunch begins to ease, Uchida said.

Conservative guidance given the uncertainty of the outlook was expected, SMBC Nikko analyst Toshihide Kinoshita wrote in a note. However, considering that alliance partner Mitsubishi Motors Corp. is forecasting a profit for the current fiscal year, Nissan’s guidance “does look like a negative surprise.”

Nissan has had rolling factory stoppages and production cuts since it first warned of a chip shortage in January. It’s moving to offset the impact of the shortage by prioritizing production of popular models and cutting back on some tech components in cars.

The semiconductor shortage is expected to cost the auto industry millions in car sales this year and Nissan “is likely to struggle earlier and longer than others,” Bloomberg Intelligence analyst Tatsuo Yoshida said.