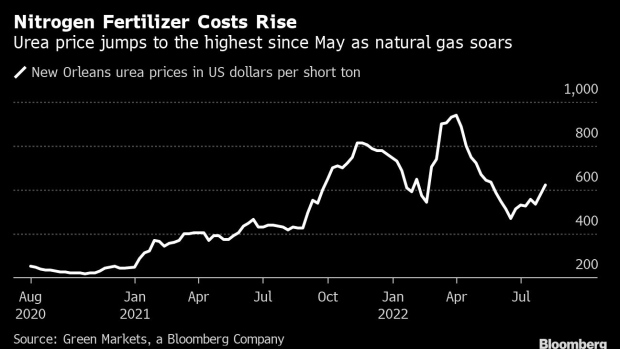 (Bloomberg) -- Just when the fertilizer market started to see some relief, nitrogen prices are rising again — and major companies are sounding the alarm that they won’t let up anytime soon.

Weekly prices for the common nitrogen fertilizer urea rose almost 7% in New Orleans on Friday to the highest since May as an energy crunch in Europe sends prices for natural gas, the main input, soaring. Europe’s fertilizer industry closed or curtailed output at 10 plants in July as operating costs soared, pressuring a market that has been in chaos since Russia invaded Ukraine in late February.

Wholesale fertilizer prices soared to multiyear highs after Vladimir Putin’s aggression roiled commodity markets. Russia is a big supplier of every major type of crop nutrient. In a bid to contain rising food costs, the US exempted Russian fertilizer sales from wide-ranging sanctions. Nonetheless, restrictions on other energy exports rippled through the supply chain. Recently, prices had been dropping but that trend reversed amid prolonged European curtailments.

“The global nitrogen market is likely to be short the fertilizer it needs if product prices do not incentivize greater production in high-cost regions,” Frost said.

“The world is going to be incredibly tight availability of product as we get into both winter and then into the spring next year,” CF Chief Executive Officer Tony Will said. “Particularly, if the situation in Europe is not resolved in the coming months because that just further pressures the whole system with winter coming.”

Nitrogen remains a "constrained market" despite the late start to spring planting in North America and Brazil that led to lower application rates and a carryover of supplies, Nutrien Ltd. Interim CEO Ken Seitz said Thursday on an earnings call.

More than 20% of Europe's ammonia production is estimated to be curtailed and there are concerns over gas pricing and availability through the winter, Seitz said.

"Many buyers have delayed purchases given recent market volatility and we anticipate a seasonal resurgence of demand in the second half that could further tighten supply," Seitz said.