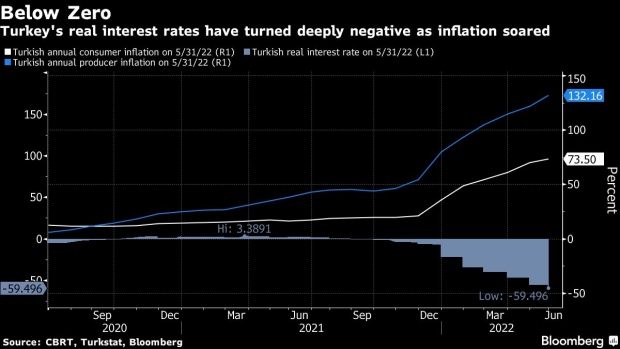 A vendor arranges a display at a fishmonger's stall in Istanbul, Turkey on Thursday, April 21, 2022. Turkish inflation soared to a fresh two-decade high in March, leaving the lira increasingly vulnerable by depriving the currency of a buffer against market selloffs. Photographer: Erhan Demirtas/Bloomberg , Bloomberg

One of the world’s worst inflation crises is closing in on another grim milestone in Turkey, and government efforts to help the population cope with the fallout only threaten to make it worse.

Price growth has been in the double digits almost without interruption since the start of 2017, but it exploded this year near a quarter-century high on the back of soaring energy and other commodity costs.

Data due Monday will show annual inflation reached 80% in June, from 73.5% in May, according to the median estimate in a Bloomberg survey of of 17 economists.

“We observe typical spiraling inflation in Turkey now, as there is no anchor for price makers,” Deutsche Bank AG economists including Fatih Akcelik said in a report.

A combination of self-inflicted damage and price pressures from abroad have stirred up a storm in Turkey that the International Monetary Fund estimates will result in the world’s highest inflation this year after Venezuela, Sudan and Zimbabwe.

In Istanbul, the country’s commercial center, retail inflation accelerated to an annual 94% in June. Producer prices, an early indicator of inflation, have been growing by more than 100% for four straight months.

The central bank, which just over two months ago predicted inflation could already start slowing as early as June, hasn’t raised policy interest rates in over a year after a round of monetary easing in late 2021, responding only with measures to cool off consumer lending.

Declines in the lira against the dollar continued in June, adding to this year’s worst performance in emerging markets that’s stoking inflation by making imported goods more expensive.

With the central bank holding rates, especially when hikes from rest of the world are putting pressure on the lira, inflation is set to increase going forward.

Ahead of the elections scheduled for next June, his government on Friday announced an interim increase in the minimum wage for the first time in six years, raising pay by nearly 30%. Turkey already boosted its minimum wage by a record 50.5% in January.

Under the previous governor, the central bank had cautioned about a “positive shock” on inflation from increases in the nominal minimum wage. Its report last year found that headline price growth rises by one percentage point for each 10% increase in the minimum wage.

Erdogan has called for patience and said last week that inflation will slow to “reasonable” levels from February-March next year.