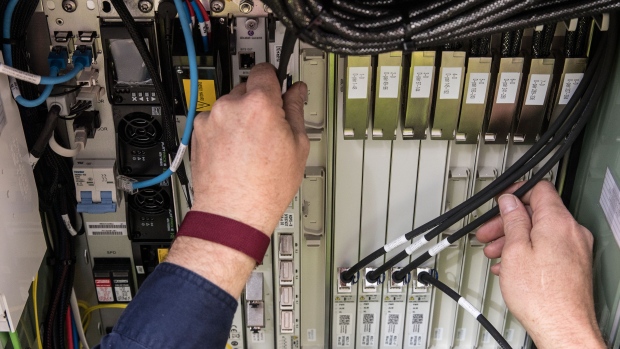 An NBN Co. technician handles hardware in a fiber distribution cabinet during the installation of fiber-to-the-building connections in Sydney, Australia, on Tuesday, Oct. 3, 2017. , Bloomberg

The federal government hasn't established a clear strategy that sets out the costs and timelines for bringing broadband access in rural and remote areas up to the national minimum standard, Canada's auditor general said Tuesday in his fall report to Parliament.

The AG's report says officials in the Department of Innovation, Science and Economic Development estimated it might cost $6.5 billion or more to provide all parts of Canada with at least the minimum standard.

In its response, ISED said it agreed with the report and began a consultation in June to establish a national digital and data strategy that includes broadband connectivity.

That was followed by a meeting of federal, provincial and territorial ministers who issued an Oct. 26 statement that included support for universal access to internet speeds of at least 50 megabits per second download and 10 mbps upload.

ISED minister Navdeep Bains told a media briefing in Ottawa after the report was issued that he and his counterparts had agreed "to develop a long-term strategy to improve access to high-speed internet connectivity and services to all Canadians."

The auditor's report also says, among other things, that the lack of a national strategy had hampered the implementation of the Liberal government's Connect to Innovate program, which allocated $500 million over five years starting in 2016.

It says ISED has been slow to inform stakeholders about when backbone network infrastructure funded by the program will be available to them and what they would be charged for access.

"However, this information cannot be released until after the contracts have been signed. We found that the department encountered delays in completing the due diligence work required ahead of signing.

"It began due diligence work on each project only after the minister provided conditional approval."

The report adds that only three contracts had been signed under the program as of June 2018.

In his address to media, Bains said there have been 180 projects approved to date for more than 900 rural and remote communities -- exceeding the original goal of 300 communities when the program was announced.

The auditor general suggested that ISED review the way it manages the spectrum auctions.

It said there was concern that there will be less spectrum available for fixed wireless broadband in rural and remote areas if some of it is redeployed for mobile access after an auction of 3,500 megahertz spectrum planned for 2020.

It also said the deployment conditions don't provide a strong enough incentive for licence holders to offer services outside major urban centres or to sub-licence unused spectrum to smaller service providers in rural and remote areas.

In its response to the auditor, ISED said it will continue to address the needs of rural and remote communities when developing licensing rules, study ways to make unused spectrum available to underserved areas and to use a variety of licensing methods including non-competitive licensing processes in addition to auctions.