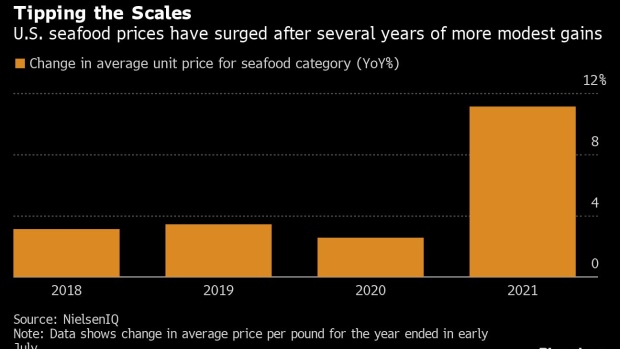 Workers prepare to offload Dungeness crab from a boat on Pier 45 in the Fisherman’s Wharf district in San Francisco, California, U.S., on Wednesday, Jan. 13, 2021. After weeks of negotiations on a per-pound price between wholesale processors and the crab fishermen and delays to protect migrating whales from getting entangled in fishing lines, crab pots are being set as of Monday January 11 with crab being available as soon as January 15. , Bloomberg

(Bloomberg) -- At the Clam, there are no scallops.

Prices went “crazy,” says Mike Price, who co-owns the Greenwich Village restaurant, and so he yanked them off the menu. Over in Napa Valley, Phil Tessier, the executive chef at a popular spot called PRESS, did the same. And in Atlanta, at the tapas joint the Iberian Pig, chef Josue Pena didn’t stop at scallops. The Alaskan halibut and blue crab are gone, too.

That last one was a killer, Pena says. Crab croquettes had become a signature dish. “People were like ‘what’s up?’” But, he says, with wholesale costs soaring like they are, “the price we had to charge to be profitable was almost insulting.”

For restaurants across the U.S., the re-opening from Covid lockdown has been anything but easy. They’ve struggled to hire back enough waiters and chefs, often being forced to dangle double-digit pay hikes, and have been rocked by cost increases and shortages on all kinds of items -- from condiment packets to takeout packaging and chicken wings. So this jump in seafood prices, part of the broader inflationary surge working its way through the U.S. economy, is only further squeezing restaurateurs just when they were supposed to be raking in cash as they recover from all those months lost to the pandemic.

Seafood prices rose about 11% in the 12 months through early July from the previous period, according to NielsenIQ. Stretch out the time horizon a little, Pena says, and the increases on certain hard-to-find products are much starker yet. A pound of halibut, he says, goes for $28 from the local seafood distributor he buys from in Atlanta. Before the pandemic, it was $16 at most. And blue crab has gone from $18 a pound to $44. But at least he can find crab. In Orlando, Brennan Heretick, co-owner of High Tide Harry’s, had to stop selling crab fingers because wholesalers in the region stopped offering them.

Just like in dozens of other overwhelmed industries in the booming economy, there are any number of factors causing the shortages and price spikes: The ports are congested; there aren’t enough fishermen; there aren’t enough truck drivers; and demand for seafood at restaurants is soaring.

“Distributors used to hustle and bustle to get your business,” says Jay Herrington, who owns Fish On Fire, a restaurant that’s a 10-minute drive from Heretick’s place. Now, “you don’t get a delivery, or it’s a late delivery. Sometimes we have to go and pick it up.” That’s something he’d never seen before. Herrington recently raised entree prices, which range from $10 to $20, by as much as $3 to offset the higher costs. “There’s just no stopping it,” he says.

Herrington’s headache is part of the broader backlog at U.S. ports that has sparked complaints for consumers and companies across the U.S. economy and is a major driver of the higher prices, according to Gavin Gibbons, vice president of communications at the National Fisheries Institute. Labor shortages have caused “serious delays,” he said in an email. He estimated that port-related costs are on track to be 20 times higher for the group’s member companies than last year.

A lack of fishermen is another fundamental problem. When restaurants shut down during the pandemic, it meant that a key buyer evaporated, according to a report by the National Oceanic and Atmospheric Administration. That resulted in financial losses for many in the industry and forced them to find work in new areas. Additionally, most fishermen in the U.S. are older than 40 and few young people are entering the field, according to Michael Priebel, manager of Keys Fisheries in Marathon, Florida.

“A lot of people went into construction,” he said. “We see less and less people coming back every year because they are getting old and fishing is getting more expensive.”

The hurdles don’t stop there. Higher prices for cod, for example, are due to a shortage of shipping containers, according to Sysco Corp., which is one of the world’s largest food distributors and wholesalers. Lobster, meanwhile, has seen low inventory since Covid-19 restrictions in Canada last summer reduced boat crews going out to sea for prime-season catching, Sysco said in an email. Supplies are currently being replenished as Maine’s season progresses, but prices remain high due to elevated demand.

Back at High Tide Harry’s in Orlando, Heretick says he’s now struggling to find crab legs as well as the claws he needs for his crab fingers dish.

The price on the crab meat he does find has more than doubled since January. Ditto for lobster. Then he rattles off a bunch of other cost increases he’s been hit with: paper products, liquor, bamboo cocktail skewers, gloves. He says those last two items are each up 200% or more. There are higher labor costs, too. Heretick recently bumped cooks up to $16 an hour and doled out increases to hosts and wait staff, too.

So far, he’s eaten much of the higher costs, opting to keep prices mostly stable on the menu -- which lists the fried oysters dish at $19.99 and the shrimp-and-scallop scampi at $24.99 -- as he welcomes old customers back. He can’t keep going on like this, though, he says. One recent month, High Tide Harry’s raked in record revenue and yet Heretick was saddled with a $14,000 loss.

“We hope,” he says, “that when we do have to have a little bit of a price increase, that everybody’s understanding that we did everything we could.”