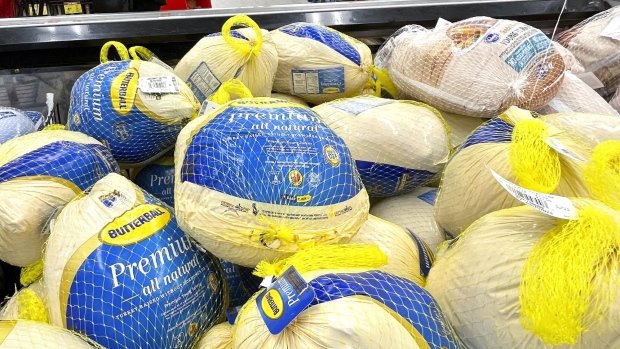 LOS ANGELES, CALIFORNIA - NOVEMBER 11: Turkeys are displayed for sale in a grocery store ahead of the Thanksgiving holiday on November 11, 2021 in Los Angeles, California. U.S. consumer prices have increased solidly in the past few months on items such as food, rent, cars and other goods as inflation has risen to a level not seen in 30 years. The consumer-price index rose by 6.2 percent in October compared to one year ago. (Photo by Mario Tama/Getty Images) , Photographer: Mario Tama/Getty Images North America

(Bloomberg) -- Publix, the operator of about 1,300 supermarkets in the southeastern U.S., is capping purchases of several Thanksgiving staples amid supply-chain issues.

In an emailed statement Wednesday, Publix spokeswoman Nicole Maristany Krauss said the company has set purchase limits on canned cranberry sauce, jars of gravy and canned pie filling. She attributed the moves to “ongoing supply issues and increased holiday demand” and said Publix seeks “to best serve the majority of our customers.”

Publix isn’t alone in taking such measures. Southeastern Grocers, which operates supermarkets in the same region as Publix, is capping the purchase of turkeys at one per customer.

More than a year and a half into the pandemic, supply-chain bottlenecks have been blamed in part for the uptick in U.S. inflation. Despite some recent signs of improvement, it’s clear that the U.S. is far from done with its logistics woes.

According to Publix, other items with purchase limitations are: