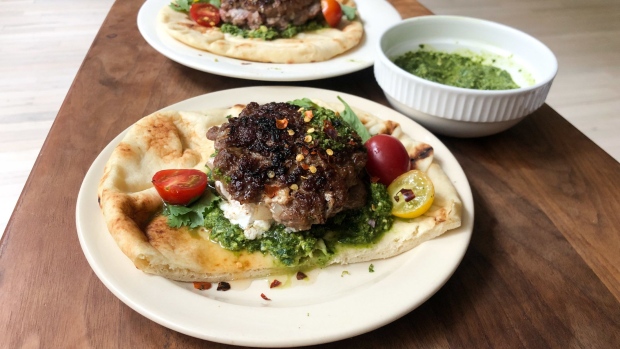 (Bloomberg) -- Editor’s Note: As we leave our home kitchens to dine out more, the weekly Lunch Break column evolves to highlight dishes from a variety of sources: a new or reopened restaurant; a newsmaking person, place, or recipe; or, of course, a great cookbook.

If ever there were a time to follow the rules of local eating in the food world, it’s now, at the end of summer. It’s criminal not to load up on produce such as tomatoes, which are currently overflowing at farmers markets.

Yet it’s also that time of year when change is in the air and summer routines give way to a fall refresh. What was perfect off the grill on a hot July day seems a bit boring now that we’ve arrived in September.

Antoni Porowski can preach on the subject of change (as well as hangover cures). The Queer Eye star, who along with his co-stars wrapped season 6 of the hit reality show earlier this summer, is famous for helping people alter their routines—and their lives. “It’s important to switch it up,” he says in a phone interview. “I get tired of preparing things the exact same way.”

That point of view informs his helpful new book Antoni: Let’s Do Dinner (Mariner Books; $30; Sept. 14), in which he offers a slew of options to break up patterns for evening meals. Chapter titles include “Break an Egg”; “Veggie Night”; and “Salad, but Make it Dinner.”

“The book helps expand the repertoire of what dinner can be,” says co-author Mindy Fox, a Portland, Maine-based food writer. “It’s breaking the norm to give you a lot more ideas, a lot of flexibility.”

The “Sandwiches & Their Cousins” chapter is especially good for people who want a dish that’s great whether eaten outdoors or at the dining room table, or even—given this column’s name—for lunch. There are recipes for a Polish banh mi stocked with kielbasa and for curried egg and avocado tartines. And, of course, a burger. “I’ve never met a burger I didn’t like,” proclaims Porowski in the chapter.

His favored version is made of lamb and was inspired by eating at Darjeeling Express in London. Chef Asma Khan, he says, “showed me this lamb patty that was filled with this cooling, yogurt-y, minty sauce in the center that she explained was the food of aristocrats—and I was just blown away by it. I’ve been thinking about that lamb burger ever since.”

In his book, Porowski pays homage to the trick by tucking a few spoons of yogurt into the patty. The seared, stuffed burgers are served on a soft flatbread with a simple, pesto-like cilantro chutney and optional garnishes such as mint and red pepper flakes. It’s a dish that’s more than the sum of its parts.

Tuck into the crusty burger and admire the contrast of the gamy spiced lamb with the soothing yogurt secreted inside; the chutney enlivens it with jolts of jalapeño and lime. Shower everything with herbs, and it becomes even more compelling, especially with the flatbread base that breaks up the boring burger-in-a-bun routine.

Porowski believes the dish will help more people appreciate lamb. “It’s a wonderful meat. I’ve been eating it since I was a kid. And I think it’s really delicious, and people should give it a try.” But, he says, you can switch up the protein by using beef instead. Skip the yogurt if you’re dairy-free, and serve it in a lettuce leaf if you’re counting carbs.

“The warm spices are a nice, gentle welcome to the fall,” he says of the cumin and cayenne seasoning. But he makes a point of garnishing the dish with one last blast of late summer: “That there are only a few weeks left of tomato season, this is a great opportunity to get a beautiful heirloom or a beef steak, or beautiful Jersey tomatoes.” He adds: “Use those up fresh while you can, because we’re going to miss them in the winter.”

The following recipe is adapted from Antoni: Let’s Do Dinner, by Antoni Porowski.

In a blender, puree all ingredients until smooth. Adjust seasonings to taste, and add a little more water if it’s too thick.

In a bowl, mix the lamb with the onion, cumin, cayenne, and salt. Using damp hands, shape the mixture into 8 patties, about 4 inches wide and a half-inch thick and put them on a parchment lined baking sheet.  Spread 2 tbsp yogurt on top of each, leaving a half-inch border. Set the remaining patties on top, and pinch the sides to seal together and keep the yogurt in; don’t worry if a little bit oozes out.

Heat the oil in a large, nonstick skillet. Working in batches, cook the burgers over moderate heat until browned on the bottom, about 5 minutes. Carefully turn and continue cooking about 5 minutes longer, for medium rare.

Spread about half the chutney inside the pitas or on the warm flatbreads. Add the burgers, and garnish with toppings of choice. Drizzle with more chutney and serve.