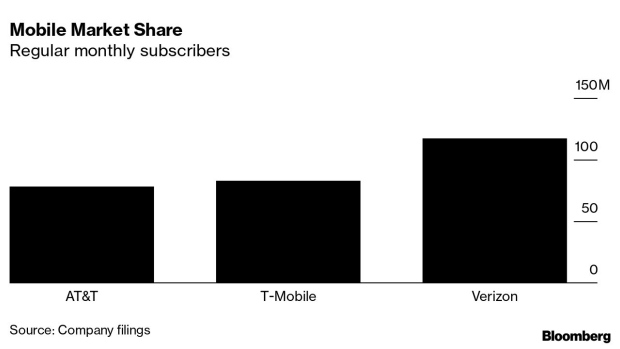 (Bloomberg) -- T-Mobile US Inc., the once boisterous and often obnoxious upstart of the wireless industry, is settling into a more subdued middle age. No longer trying to generate buzz by openly mocking its rivals, T-Mobile is instead showing up its peers in the stock market.

Under former CEO John Legere, T-Mobile positioned itself as a scrappy independent that branded competitors AT&T Inc. and Verizon Communications Inc. as “dumb and dumber.” Often clad in black and magenta garb, Legere took on the persona of a snarling underdog, roasting his “evil” adversaries to his 6 million Twitter followers and treating customers to free taco Tuesdays in a bid for attention.

But ever since Legere’s successor Mike Sievert took over in April 2020 following T-Mobile’s $26.5 billion merger with Sprint Corp., the new No. 2 U.S. wireless carrier has turned a bit stodgy. Sievert keeps a much lower profile, more fitting for a company that’s come into its own as a wireless powerhouse with a big head start over its rivals on next-generation technology.

It’s boring, but Wall Street is happy. The stock is up more than 70% during Sievert’s reign, besting the 4% loss for AT&T and the 4% gain for Verizon in that span. And while some analysts say they’ll miss the free publicity generated by Legere, when T-Mobile reports earnings Thursday it’s expected to announce a gain of almost 1 million wireless customers.

T-Mobile’s outperformance stems in part from the messes Verizon and AT&T got themselves into by spending almost $100 billion on media ventures that are now worth about half that amount. But investors are also cheering T-Mobile’s hoard of 5G midband airwaves that promise blazing speeds to deliver a new generation of applications for consumers and businesses. Now about a full year ahead of its rivals in offering 5G capacity, T-Mobile will soon start a wireless home-internet service that could steal business from cable companies.

T-Mobile is now a more mature company, so it makes sense that some of the underdog attitude has faded away, according to Maribel Lopez, who runs an eponymous research organization focused on the communications industry. Now, investors want to see the company taking advantage of its head start with 5G in a race to reap the first revenue rewards.

“Legere made it sexy, he was bombastic, he was taking on everyone as the un-carrier, and then we come out on the other side of that,” Lopez said in an interview from Mount Pleasant, South Carolina. “At this point it’s about positioning as an equal. That’s a different kind of corporate personality.”

Sievert, 52, is well aware that some personalities can attract more attention than his own. He was in the same high school class as Brian Warner, aka Marilyn Manson, the shock-rock musician known for his outlandish makeup and stage presence.

“While we did grow up in the same small town, I guess we took rather different paths coming out of Canton, Ohio,” Sievert said in an interview.

Unlike his telecommunications peers who started their careers in engineering, accounting or sales, Sievert has always been a marketing guy. After graduating from the Wharton School of the University of Pennsylvania, he went to Procter & Gamble Co. as a brand developer, then took executive roles at E*Trade Financial Corp., AT&T and Microsoft Corp.

He joined T-Mobile in 2012 as chief marketing officer, and was named chief operating officer in 2015.

The wireless company is based in Bellevue, Washington, and he has adopted the Pacific Northwest as his home for the past two decades. For fun, he pilots a two-seat seaplane with his wife Suzanne on trips along the Washington coastline.

One of his career-defining moments came at Microsoft, when he led the launch of Windows Vista in 2007.

Designed to replace the very popular Windows XP operating system, Vista flopped after users found it glitchy and unwieldy. It was a setback for Sievert, who found that even a massive $500 million marketing budget was powerless against a series of TV ads from Apple Inc. that featured a cool Mac guy painfully mocking a PC guy. Vista was quickly replaced in 2009 by Windows 7.

Sievert says the experience taught him that even great marketing can’t make up for a weak product.

“You have to have an amazing story and an amazing product,” he said. “That combination will take any company a long long way -- and it is how we operate to this day here at T-Mobile.”

In his 15 months as chief, Sievert has shelved the maverick act and taken some pages right out of the traditional carrier playbook. This is an odd turn for a company that used to compensate for its spotty coverage with lures like no service contracts, free international roaming and unlimited data plans -- offers its competitors were forced to match. These days, breaking from its budget roots, T-Mobile sells a $90-a-month premium unlimited plan to match its peers’ highest-end offerings.

There’s a risk that the more strait-laced corporate culture is leaving behind the attitude that helped popularize T-Mobile with customers and also rallied employees.

“Energizing a workforce with confetti-littered store visits plays well on social media,” said Walt Piecyk, an analyst with LightShed Partners. “Executing on synergies, not so much.”

Sievert isn’t worried. As the industry shifts to 5G technology, T-Mobile has a head start over rivals that were left flat-footed. Sievert says AT&T and Verizon took their eye off the ball at an important transition point for the industry, and it’s a mistake he plans to capitalize on.

“T-Mobile stayed laser-focused on mobile connectivity because we knew had a huge advantage as the leading pure-play mobile internet company for the 5G era,” Sievert said.

Investors will be looking to see if T-Mobile can translate its technical advantages to bigger profits. In the meantime, they seem content with the new management style, even if the theatrics were fun for a whlie.

“Stylistically, Sievert is obviously not Legere,” said Kevin Roe of Roe Equity Research, who has a hold recommendation on the shares. The antics were good “entertainment value, but he was more of a sideshow. A brash CEO is not necessary to deliver success.”