Does Canada need a rate cut? One economist says no

With one week to go until the Bank of Canada’s next interest rate decision, National Bank of Canada has emerged as an outlier amid a growing number of voices predicting that the central bank will cut rates this fall amid mounting global trade tension.

“Unless the trade conflict between the Unites States and China escalates further, there is no need for monetary stimulus in Canada,” wrote National Bank Financial Deputy Chief Economist Matthieu Arseneau in a note to clients earlier this week.

As of Wednesday morning, the market was pricing in a 16.8-per-cent chance of a rate cut at the central bank’s Sept. 4 meeting, with that probability rising to about 61 per cent for its October decision.

But Arseneau said a cut is not necessary as Canada outperforms other “disappointing” major economies, including the United States, China and the Eurozone.

“Canada remains in the opposite camp with positive economic surprises and higher than expected inflation,” he said, pointing to job creation in the private sector and fading risks to housing.

National Bank’s position comes amid an increasing number of calls in recent days that Bank of Canada Governor Stephen Poloz will cut rates.

Bank of Montreal was the latest to revise its outlook, predicting on Tuesday the central bank will set the stage for an October rate cut at its September meeting after trade tensions escalated between the U.S. and China last week. 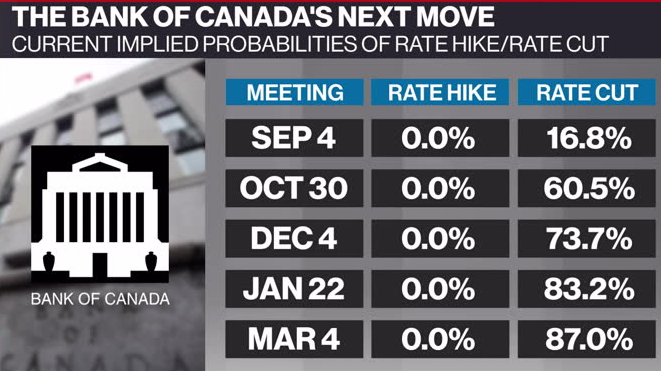