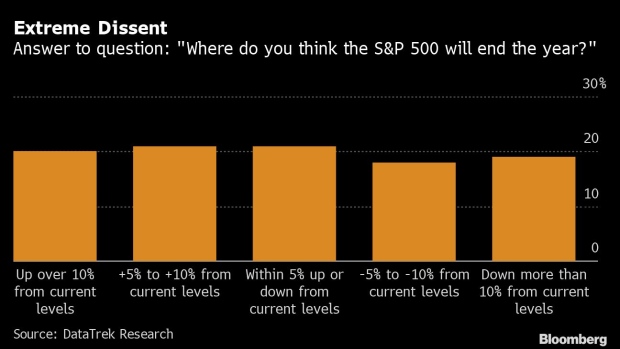 The New York Stock Exchange (NYSE) is seen in New York, U.S., on Friday, June 12, 2020. After nearly three months in lockdown, New York City officially entered its first phase of reopening — a small but important step toward some semblance of normalcy. , Bloomberg

(Bloomberg) -- When it comes to the future of the stock market, investors’ predictions are all over the map.

When asked where the S&P 500 Index would end the year, a fifth of respondents to a survey conducted by DataTrek Research said the benchmark will close out 2020 up more than 10% from current levels. That’s roughly the same number who predicted the index will finish down more than 10%.

“Every option from ‘really bad’ (down +10% from here) to ‘really good’ (+10%) got basically the same number of votes,” Nicholas Colas, DataTrek’s co-founder, wrote in an email. “And we’re only talking about the next six months.”

Such dispersion is perhaps understandable after the stock market’s fastest-ever fall into a bear market gave way to the quickest 50-day rally in nine decades. While investors are hopeful for a quick economic recovery from the coronavirus pandemic, the outlook is foggy as cases continue to rise and new risks emerge. Investors also have a wary eye on November’s U.S. presidential election and the potential for volatility around that time.

According to the survey -- which attracted 341 responses from June 22 through June 28 -- 48% said they expect Joe Biden to win the presidency, compared to 43% who foresee a Donald Trump victory. According to Colas, political expectations weighed heavily on investors’ general market views.

“Respondents who said they believed Trump would win were twice as likely to think U.S. equities would rally by double digits into the year end,” Colas wrote.

Wall Street strategists are also split on the future for stocks. As of Friday, the gap between the highest and the lowest year-end S&P 500 price targets stood at 28%, the second widest at this time of year since 2009, according to data compiled by Bloomberg.

To Randy Frederick, vice president of trading and derivatives at Charles Schwab, much of the uncertainty is derived from a lack of data and earnings guidance from companies.