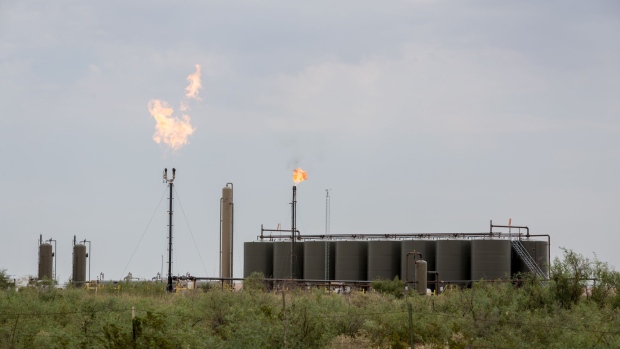 Methane gas is flared just off U.S. Route 285 near Carlsbad, New Mexico, U.S., on Tuesday, Aug. 6. 2019. New Mexico's Governor Michelle Lujan Grisham is balancing her concern over the catastrophic effects of climate change with the state's extraordinary dependence on oil and gas. , Bloomberg

(Bloomberg) -- It was 12 miles wide, invisible to the naked eye and traveled across six counties to Florida's largest city. And it's still unclear who — or what — was responsible.

The mysterious plume of methane, estimated to total 300 metric tons, was released north of Gainesville between May 2 and May 3, when it reached Jacksonville, according to Bluefield Technologies Inc., which analyzed data from the European Space Agency’s Sentinel-5P satellite.A global-warming agent that’s 80 times more potent than carbon dioxide, methane has become a major source of concern for environmentalists and climate-minded investors who are stepping up pressure on energy companies to curb emissions of the gas from oil fields, pipelines, gas storage facilities and power plants. Satellite observations are beginning to make those leaks more transparent. Last year, Montreal-based GHGSat Inc. identified a giant methane cloud apparently from an oil and gas field in Turkmenistan, billing it the first discovery of an unknown industrial methane release from space.

“This capability means we no longer need to fight climate change blindfolded,” Yotam Ariel, the founder of Bluefield said. “We now have a tool to directly see what was once invisible and channel resources to reduce emissions quickly and effectively.”

The source of the Florida emission remains unknown, however. Its volume was equivalent to roughly 1% of total daily emissions from the U.S. natural gas system in 2018, Stanford University professor Adam Brandt said. Its epicenter was in Alachua County, according to Bluefield.

Staff at the Alachua County Environmental Protection Department “are unaware of any incidents that may have contributed to methane emissions” on those dates, Stacie Greco, a coordinator at the agency, said in response to a public records request. The county doesn’t have an air quality program and deferred reports of air emission violations to the state’s environmental agency. Alachua didn’t receive any reports of hazardous material spills on those days, she said.

The Florida Department of Environmental Protection, which tracks emissions and issues air permits, said it’s working to track down the source of the release.

“This scale seems like an industrial facility, power plant, or gas compression or handling system,” said Brandt, who studies methane emissions and called it “a significant leak.”

While the technology to spot leaks is improving, there can often be the challenge of pinpointing the perpetrator. There aren’t many industrial facilities nearby and among the closest potential heavy-emitter candidates are a natural gas pipeline system and power plants, public records show.

On April 24, Gainesville Regional Utilities requested an exemption for air permitting to replace a steam turbine generator at its J.R. Kelly power plant, which is less than 12 miles south of the epicenter of the methane cloud. The request was made because the switch would not result in an increase in usage or capacity of the plant, the utility said in a filing made to with Florida Department of Environmental Protection filing in June. “Consequently, the proposed work does not need an air construction permit to proceed,” GRU said.

GRU didn’t disclose the date for replacing the turbine, but said it planned to file performance test reports for the project on or after July 1, within 60 days of competing those tests.

Energy Transfer LP’s Florida Gas Transmission has natural gas pipelines circling the area where the methane was detected and a compressor station north of the site. The company didn’t report any planned or unplanned outages at compressor station No. 16 in Bradford County, according to pipeline notices.

Weyerhauser Co., the Seattle-based forest products company, owns the land at the center of the May 2 methane emissions event, said Christine Berish, development review manager for Alachua County’s Department of Growth. “We don’t have any development projects in that area.”