Deep in the flatlands of South Carolina, along a dusty road rung by pine trees, the wood-saws at the Charles Ingram Lumber Company whir day and night, cranking out the two-by-fours that have become the essential, and suddenly hard-to-find, ingredient of the great pandemic housing boom.

Furman Brodie, who oversees operations at the 90-year-old company, says he only idles the machines long enough to give them the necessary maintenance -- a few hours at most. And with prices on all cuts of wood soaring, he’s directed his crews to cut boards out of almost every inch of every tree that comes in. “If I could have 28 hours in a day instead of 24,” he says dryly, “I might run a little bit more.”

Brodie readily admits he was caught flat-footed last year by the surge in demand. He never saw it coming. And, like many other sawmill operators across North America, he’s now stuck somewhere between scrambling to catch up to demand and girding against the busts that so often follow booms.

Over the past year, new home-building has reached a nearly 15-year high, fueling extraordinary demand for building materials. Lumber producers that had curbed production when lockdowns began quickly exhausted inventories, sending futures prices surging to new records, while a trucking shortage exacerbated the situation. Suddenly, sawmills had become a key bottleneck in the lumber supply chain, a black box standing between timber forests and the retail shelf. 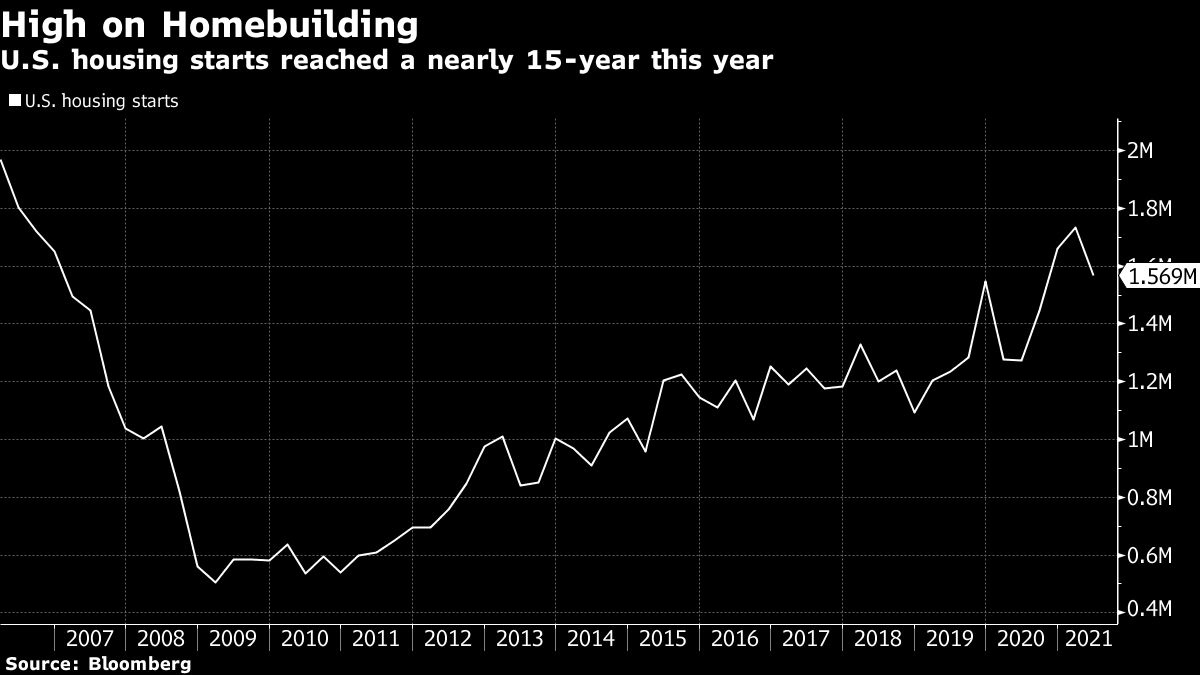 And yet, for many in the industry, the first hint of lumber mania came not on the assembly line, but at Lowe’s. At the start of the pandemic, Micky Scott was weighing cutbacks at his South Carolina sawmill -- until he walked into the home improvement store one weekend. Inside, the usually well-stocked lumber bays ran empty, even as lockdowns halted the nation’s non-essential commerce. “Lumber was just flying out the door,” he said. “I knew right then we were looking at the thing totally wrong.”

It took another several months for Brodie to reach the same conclusion. He, too, found himself in Lowe’s one day, stunned as he watched another customer walk away with the last two four-by-fours in the building.

A year on, the entire industry is still trying to catch up to consumers’ voracious appetite for wood, with the biggest lumber producers in North America rolling out expansion plans. Already, U.S. And Canadian sawmill capacity increased by 1.4 billion board feet in the past twelve months, with even more expected in the second half of 2021, Forisk Consulting data show.

Part of the reason for the sector’s delayed response: Sawmills are slow. It can take two days or more to turn a log into a retail-ready two-by-four, as the wood needs to be kiln-dried and sometimes treated. The machines that process the lumber need downtime every day for maintenance. And there’s always the risk that investing in expansion will be money wasted once the market cools, something that’s already starting to happen as building slows for the season and imported European lumber helps fill the supply shortfall.

Still, Brodie has found ways to eke out as many boards as he can at the Charles Ingram mill. Not only is the plant running 20 hours a day, his crews are using precision scanners to map out the most profitable way to slice up each log. From the highway, the facility doesn’t look so high-tech: just a series of low slung, metal warehouses hemmed in by stacks of wood. But inside, sawyers sitting inside cab-like rooms use control sticks to move logs through the mill with a flick of the wrist.

The process has been honed to the point that nothing goes to waste. Bark and wood chips are shipped off to a paper mill. Sawdust, which spews out of the machines like snow, is used to power the kilns.

“We can use every bit of the tree except for the smell,” Brodie said.

Business has been so lucrative that the company is planning to replace a small-log plant this year with a bigger facility that will boost production by about 10 per cent. The same is happening across the U.S. South, where timber remains abundant. West Fraser Timber Co., the world’s biggest producer, is planning to expand capacity at five plants in the region. Canadian producers Resolute Forest Products Inc. and Interfor Corp. are restarting mills in Arkansas and Georgia, respectively.

Whether prices stay elevated long enough to justify those investments remains to be seen. After reaching new records month after month, lumber futures began declining this month in the longest losing tumble since September. That may signal that the historic rally is coming to a close, even as builders continue to pay record-high cash prices for wood due to tight supplies at sawmills.

That doesn’t affect life for Gregg Hutto, who manages Scott’s sawmill, Collum’s Lumber Company, in Allendale, South Carolina. Hutto’s been in the industry long enough to know that market conditions can change rapidly for the worse. Before last year’s rally, the entire industry was in retreat, closing mills and curtailing production.

Now, while other mills are working as much as possible, Collum’s runs only one 12-hour shift per day and operates on just one weekend per month.

“The people inside the mill don’t really know what the market’s doing, because we don’t change our speed,” he said.

Still, through some machinery improvements, the mill is producing about 20 per cent more: almost 1 million board feet of Southern Yellow Pine a day, enough wood to frame more than 60 single-family homes. The uptick is set to yield about US$2 million in profit-sharing for the mill’s workers this year.

“We’re piling it up right now,” Scott said. But he cautioned: “When you’re making it big, you better hang onto it, because it’ll go sour and you better have something to fall back on.”