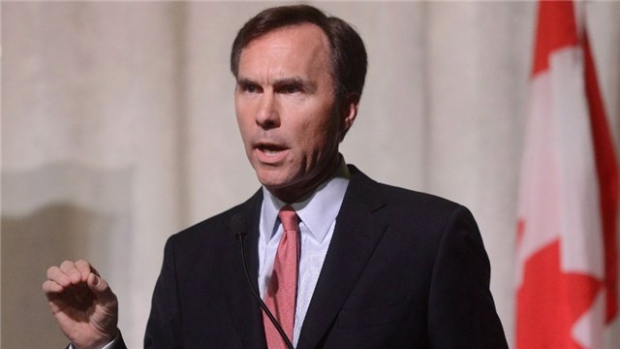 The federal government is capitalizing on the stronger than expected economy by chipping away at the deficit, but it provided no path to balanced budgets in its fall economic update.

Here’s what analysts had to say about Bill Morneau’s Tuesday announcement:

“I think really the only worry that I would have is the economy is booming right now; but it was booming in 2006, 2007 -- and just over the hill where you couldn’t quite see, disaster was looming. That’s when you need the resources to be able to really provide fiscal stimulus and I worry that we won’t be in that position."

“It’s not all that impressive, a budget balance when the economy is going as well as it is. What's clear in the out years is that there's going to be some negative revenue impact from cutting the small business tax rate.”

“What we should have seen today was a clear path to getting back to balance. When it gets pushed off over the horizon like this, the Maple Leafs are more likely to win the Stanley Cup before we get back to balance. It’s important during the good times that we begin to put the house back in order again.”

“It’s not a good thing to run deficits unless you’re really confronting a significant economic downturn, which obviously we are not. We are talking about $20 billion - and deficits as far as the eye can see – and that adds up to enormous, ballooning debt. In 15 years it’s going to reach $1 trillion. By 2045, $1.5 trillion, $82 billion in interest that year alone. This is an inter-generational problem. We’re spending money today and we’re saddling our children with the expense.”

“We keep setting ourselves up for basically robbing future voters and our grandchildren of their maneuverability by adding on debt for those future generations. It’s very disappointing not to see any path towards a balanced budget.”

“Our role is to support whatever government is in power. Criticize when they move in the [wrong] direction and celebrate when they wake up and say, ‘Hey maybe that was a stupid idea, and we’ve listened.’ I’m grateful that they listened and hopeful that we’ve heard the last of what were frankly very silly proposals.”

"Here’s a golden opportunity for the Finance Minister where the economy is booming in a way that was not expected, job growth is great. So, he had a chance to really make a concerted effort to say, ‘Let’s get back on track to our original promises during the election of $10-billion deficits going down to balance.’ But, instead, we’ve got some improvement in the deficit but still no talk of going towards a balanced budget."

“I don’t think the size of the deficits right now is a concern – even if the economy hits a bump in the road.”