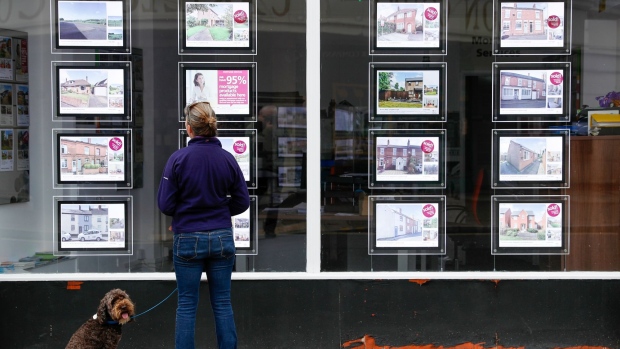 A pedestrian looks at residential sales displayed in the window of an estate agent in Loughborough, U.K., on Monday, July 5, 2021. Global valuations in the property markets are soaring at the fastest pace since 2006, according to Knight Frank, with annual price increases in double digits. , Bloomberg

(Bloomberg) -- Buyers returned to the U.K. housing market last month and found that homes were in increasingly short supply, according to a survey by the Royal Institution of Chartered Surveyors.

The findings suggest the property market remains solidly underpinned even after a tax break on purchases finished. House prices are expected to keep rising in the coming year, RICS said.

“The imbalance between demand and supply remains the most striking theme, and feedback from members provides little reason to believe this issue will be resolved anytime soon,” said Simon Rubinsohn, chief economist at RICS. Rising values risk putting “greater pressure on affordability at a time when money markets are sensing interest-rate increases coming.”

RICS said demand for housing picked up after a summer lull. That followed the tapering of a 15,000-pound ($20,000) stamp duty holiday that contributed to a property boom during the pandemic.

The tax break ended altogether on Sept. 30, but agents say the market is being supported by factors including low borrowing costs and demand for houses away from urban centers with enough space to work from home.

September saw a further decline in new listings, RICS said. In another indication of constrained supply, agents carried out fewer appraisals than they did 12 months earlier.