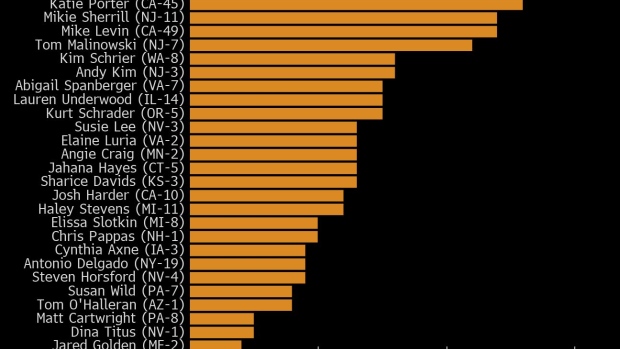 Homes stand in an aerial photograph taken over Southampton, New York, U.S., on Tuesday, Aug. 27, 2019. Would-be buyers in the Hamptons, the beachfront playground for New York City's well-heeled, have been treading cautiously, stymied by everything from tax changes to the vagaries of Wall Street employment and compensation. Photographer: Johnny Milano/Bloomberg , Bloomberg

Their demands, critical in a chamber where Democrats can afford only four defections, add to the long list of hurdles the party must clear as lawmakers rewrite Biden’s centerpiece legislation to push it through the evenly divided Senate.

Representative Tom Suozzi, a New York Democrat who has led efforts to expand the tax break, said Wednesday that a group of House Democrats is keeping the “No SALT, No Deal” pledge it coined last year, and won’t support any of Biden’s tax plans unless the bill also expands the $10,000 cap on the federal write-off.

“We will not go for this agenda, as important as it is, unless we get the state and local tax deduction,” Suozzi told the U.S. Conference of Mayors at a Wednesday meeting in Washington. “For me, it’s existential. In the state of New York, it’s existential.”

SALT is a key issue for many Democrats, particularly those representing areas in the Northeast and on the West Coast, where taxes tend to be higher.

“It will certainly be an issue in my race,” New Jersey Democrat Tom Malinowski, who hails from a competitive district, said in a phone interview. “I worked my heart out to restore this deduction, and Republicans virtually unanimously in Congress have tried to block us.”

The fight over SALT began when the tax break was restricted to $10,000 in the 2017 Republican tax law. The House-passed version of Biden’s social-spending bill would increase that cap to $80,000 -- amid objections from some progressives that it largely benefits higher-income households. But the bill, which includes healthcare, childcare and climate priorities along with tax measures, remains stalled in the Senate.

Democrats have made little headway in the month since Senator Joe Manchin voiced his opposition to the legislation. The West Virginia Democrat’s vote in a 50-50 Senate is critical for the package to pass under special budget rules requiring a simple majority.

SALT, which has no support from Senate Republicans, is unlikely to advance on its own. But while some lawmakers have threatened there won’t be a deal without SALT, Malinowski said it’s also true that there won’t be SALT reform without a deal.

“If there’s no deal, then there’s no opportunity to advance any of the reasonable compromises that emerged from our negotiations on the SALT deduction,” Malinowski said.

Suozzi said he didn’t think Manchin or Senator Kyrsten Sinema of Arizona -- another moderate Democrat -- would object to SALT’s inclusion in a final package. But getting the broader deal will be a big challenge in a Senate where there is no room for error, he said.

“Manchin’s a really old-school politician and I think that a deal can be made with him,” Suozzi said. “Sinema is not as easy. She has certain positions and she is intractable on those positions.”