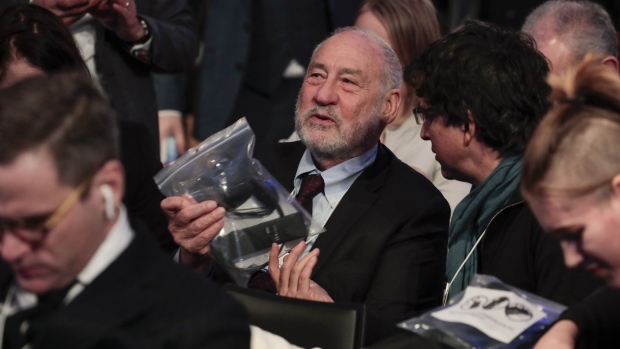 Joseph Stiglitz, economics professor at Columbia University, sits in the audience ahead of the special address by U.S. President Donald Trump, on the opening day of the World Economic Forum (WEF) in Davos, Switzerland, on Tuesday, Jan. 21, 2020. , Bloomberg

(Bloomberg) -- Nobel laureate economist Joseph Stiglitz is facing a wave of criticism from peers after he claimed crisis-prone Argentina is witnessing “an economic miracle.”

Stiglitz penned a Project Syndicate column arguing that President Alberto Fernandez’s government has implemented pro-growth policies that spearheaded a recovery against the backdrop of the pandemic. As a consequence, the economy expanded an estimated 10% last year, almost double the rate expected for the U.S., he said.

“Given the mess that Argentinian President Alberto Fernandez’s government inherited in late 2019, it appears to have achieved an economic miracle,” Stiglitz, a professor at Columbia University in New York, wrote last week.

Economists, including a colleague at Columbia, sharply rebuked Stiglitz’s op-ed, saying he missed the mark on the South American nation. While activity is indeed recovering fast, it’s doing so from a depressed base. And much of that rebound is merely the result of the reopening of some sectors of the economy that had been shuttered when the pandemic hit.

Stiglitz also didn’t delve into other parts of the real economy. Inflation is above 50%, poverty and informality shot up, foreign reserves are dwindling, the government imposes stiff capital controls and doesn’t have access to international debt markets.

“In our view, the country is heading for another economic disaster,” Willem Buiter, an economist and visiting professor at Columbia, wrote together with Anne Sibert from Birkbeck, University of London, in an essay attempting to debunk Stiglitz’s column. “Its recovery has hardly been strong enough to offset other deficiencies.”

Some local economists and analysts echoed their comments.

Reached by phone late Thursday, Stiglitz said using the word miracle may have triggered the controversy around his comments. He helped coin the term the “East Asian Miracle” in the 1990s, referring to booming economic growth in that region, and recalled the criticism he received back then.

“Maybe that was too strong,” Stiglitz said when asked about his description of Argentina’s economic performance. “If you use that word you’re inviting a critique.”

The Nobel laureate, a frequent critic of the International Monetary Fund, said he didn’t make a reference to Argentina’s inflation problem in the article because he was limited on space and wanted to focus on the real economy.

Argentina is facing a crucial moment in its negotiations with the IMF to rescheduled payments on about $40 billion from a loan given to Macri’s government in 2018 that failed to lift the country out of recession.

Why Argentina, IMF Are Wrestling Over Bad Debt, Again: QuickTake

Stiglitz said he was worried about the credibility of the U.S. Treasury as part of Argentina’s talks with the fund and expected the Biden administration to do more to support the country.

He also said he didn’t see necessary to mention in the op-ed his friendship with Economy Minister Martin Guzman, whom he mentored for years at Columbia and is now in charge of the negotiations from the Argentine side.

“It’s not like it’s a secret -- I’m not going to disclose every friendship I have,” Stiglitz said. “It would take up the whole article.”