A Reddit forum’s fervor for old-school technology stocks is sending shares in Finland’s Nokia Oyj rocketing toward their biggest weekly gain in more than seven years.

Nokia, which makes telecommunications equipment and is battling for share in the 5G market with Swedish peer Ericsson and China’s Huawei Technologies Co., soared 13 per cent on Monday in Helsinki and added to those gains Tuesday. Monday’s move accelerated after the U.S. market open, as the stock was promoted by users of Reddit’s WallStreetBets forum.

While the move in Nokia wasn’t as extreme as the swings seen in fellow “old-tech” Reddit favourites BlackBerry Ltd. and GameStop Corp., the volume was notable, especially in its American depositary receipts. More than 296 million ADRs changed hands Monday, versus the 30-day average of about 37 million, according to data compiled by Bloomberg. The ADRs ended the day up 15 per cent while BlackBerry jumped 28 per cent and Gamestop climbed 18 per cent and now is up 308 per cent for the year. 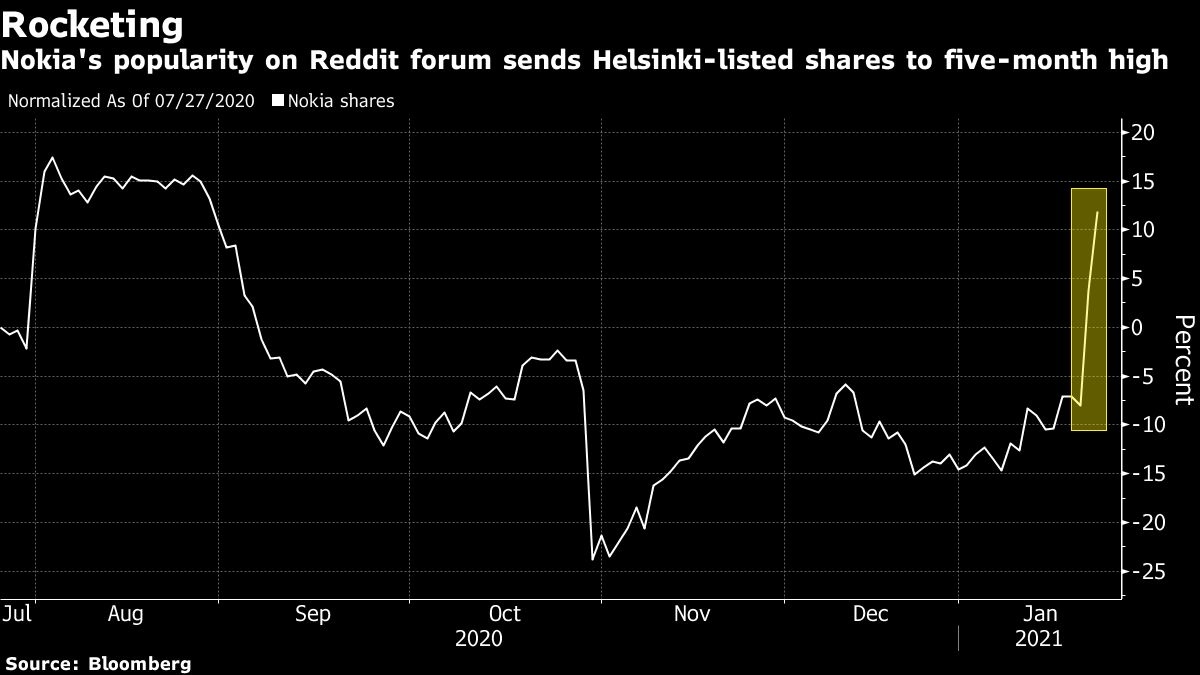 Reddit users have boosted dozens of U.S. stocks in recent weeks, including beleaguered retailer Express Inc., but Nokia appears to be the only example of the trend so far in Europe. The Finnish company’s popularity on Reddit stems in part from nostalgia for its mobile phones, which were renowned in the early 2000s for their durability and games such as Snake. Nokia lost out to Apple Inc. in the shift to smartphones and sold its handset unit to Microsoft Corp. in 2014.

“It is as if someone found a newspaper from 2006 to identify who were the golden tech companies from back then,” Neil Campling, an analyst at Mirabaud Securities, said in written comments. “Then add in the perceived attraction of a low absolute dollar stock price in the single digits and a brand people remember, and bought blindly hoping they had discovered the next Tesla.”

Nokia rose 8.3 per cent to 4.14 euros at 1:44 p.m. in Helsinki after Handelsbanken raised its price target on the stock, citing the company’s progress in signing new contracts. The ADRs climbed 2.7 per cent to US$4.98 in premarket trading. However, Inderes analysts warned of further volatility to come from the interest the stock has attracted from the Reddit forum.

A big difference between Nokia and GameStop: Bears aren’t targeting the Finnish company, which has only 2.2 per cent of its shares available for trading sold short, compared with 97 per cent for GameStop, according to data from IHS Markit Ltd.

A Nokia spokeswoman didn’t immediately reply to a request for comment on the stock performance.

The ferocity of the stock moves is symptomatic of retail investors’ euphoria, as well as the use of leverage via derivatives, said Alberto Tocchio, a portfolio manager at Kairos Partners.