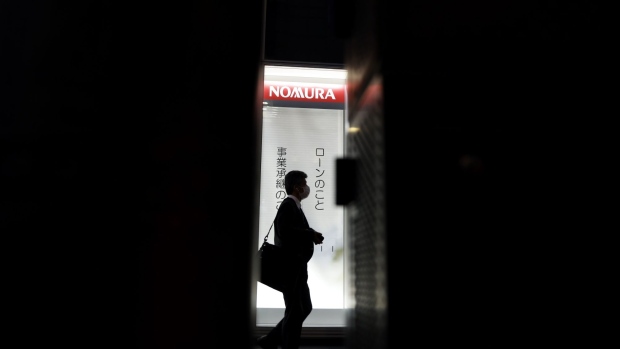 A pedestrian in front of a branch of Nomura Securities Co., a unit of Nomura Holdings Inc., at dusk in Tokyo, Japan, on Monday, April 25, 2022. Nomura Holdings is scheduled to release earnings figures on April 25. Photographer: Kiyoshi Ota/Bloomberg , Bloomberg

Bertrand, 51, joins from Borsa Italiana, where he headed derivatives markets and commodities, the firm said in a press release Tuesday. He will be based in London and starts with immediate effect.

Komainu, which takes its name from the lion-like statues that often guard the entrance of Japanese shrines, is a custodian and depositary firm for digital assets. It was started in 2018 as a joint venture between Nomura, blockchain firm Ledger, and CoinShares, a digital asset investment firm. It raised $25 million at the beginning of 2021, when it held more than $3 billion in assets under custody from a range of investors.

“Institutional clients are getting more interested in digital assets,” Bertrand said in a phone interview. “They will need to hold those assets, and we will be there to provide that service.”

He said he is not planning to raise further funds for the startup at the moment, and intends to keep a lid on costs while focusing on innovation. The custodian firm which employs about 40 people, has a provisional regulatory approval from Dubai to operate in the region, and is working on obtaining a similar license in the U.K., the newly-appointed CEO said.

Before Bertrand’s appointment, London Metal Exchange Chief Executive Officer Matthew Chamberlain was named CEO of the start-up. He ultimately decided to stay on to steer the LME through the fallout from March’s nickel crisis.

Institutional investors including banks have been pushing into digital assets as yields dried up in others markets. Nomura has recently created a new entity called Laser Digital Holdings AG.

“Post-trade and custody are the least sexy parts of the digital assets infrastructure,” said Bertrand. “But it’s a critical element.”