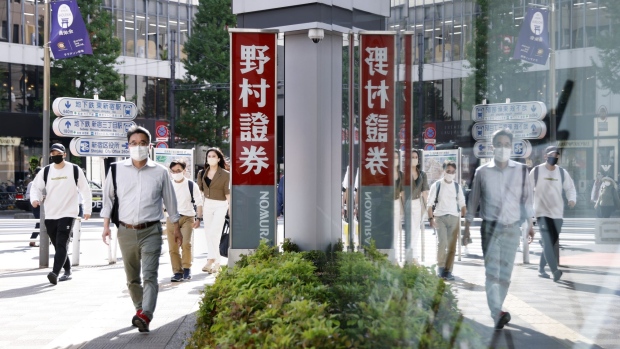 Signage for Nomura Securities Co., a unit of Nomura Holdings Inc., displayed outside one of the company's branches in Tokyo, Japan, on Monday, April 25, 2022. Nomura Holdings is scheduled to release earnings figures on April 25. Photographer: Kiyoshi Ota/Bloomberg , Bloomberg

(Bloomberg) -- Nomura Holdings Inc. may use hedges to limit further hits from its ownership of a stake in a US mutual fund manager after booking losses on the investment for two straight quarters.

Japan’s largest brokerage will “consider mitigating measures, including hedges” to reduce the earnings impact of its holding in American Century Investments, spokesman Yoshitaka Otsu said, declining to elaborate on what hedges it may use. Nomura is not contemplating divesting any of the stake or making the closely-held US asset manager a subsidiary, he said.

The unrealized losses - stemming from a dip in the asset manager’s valuation - amount to 37.3 billion yen ($280 million) over six months. The markdowns are a sharp reversal from gains in 2021, when governments pumped money into markets, underscoring how rising volatility driven by the Federal Reserve’s rate increases is complicating Chief Executive Officer Kentaro Okuda’s plan to stabilize revenue.

Nomura’s profit in the three months through June slid to the lowest in five quarters, in part due to American Century which has assets under management of around $231 billion. Management sees volatility associated with ACI as “a huge challenge to be worked through,” Chief Financial Officer Takumi Kitamura said on a call with analysts Aug. 3.

Under one option, Nomura could short futures linked to a basket of publicly traded asset managers with operations similar to ACI, according to Hideyasu Ban, an analyst at Jefferies Financial Group Inc. in Tokyo. The trades would generate returns should ACI’s valuation fall, helping to cushion the blow, he said.

Nomura bought a stake in the Kansas City, Missouri-based asset manager in 2016 for around $1 billion. Since then, gains from the roughly 40% non-controlling interest have largely added to returns at the Japanese firm, helping to soften the impact of volatile trading revenues and a decline in the retail division serving local individual investors.

The investment management division, which includes the American Century stake, in addition to funds, leasing, and private-equity investment teams, was Nomura’s second-biggest contributor to pretax income in the year ended March 2022.

But lately, unrealized losses from ACI accumulated as Russia’s invasion of Ukraine and rising inflation sent global markets tumbling. Investors have fled fixed-income securities after interest rate hikes made existing bonds less attractive. Meanwhile, US shares have seen the worst selloff in half a century in the first six months.

Under their strategic partnership, Nomura markets ACI-managed mutual funds to retail clients in Japan while the US firm offers the brokerage’s products in America.

Nomura recalculates the fair value of its exposure to ACI every quarter based on the asset manager’s performance as well as economic and market indicators.

“If financial accounting volatility leads to a higher cost of capital because of the effect it has on the market’s impression, it is worth putting on such hedges,” said Michael Makdad, an analyst at Morningstar Inc. in Tokyo.