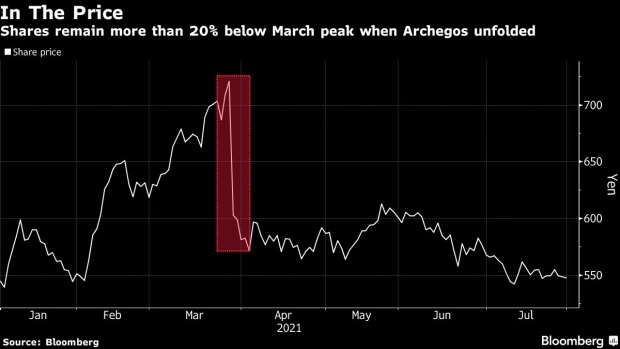 A pedestrian walks past the Nomura Holdings Inc. signage outside its headquarters in Tokyo, Japan, on Monday, March 29, 2021. Nomura's warning of a "significant" potential loss from an unnamed U.S. client is related to the unwinding of trades by Bill Hwangs Archegos Capital Management, according to people familiar with the matter. , Bloomberg

A 65.4 billion yen ($597 million) loss linked to a U.S. client weighed on net profit, dragging it back 66% in the three months ended June 30. Revenue from investment banking more than doubled from a year earlier and its domestic business serving retail investors saw assets climb to a record.

Signs the Japanese brokerage is reducing its reliance on volatile trading income will be a boost for Chief Executive Officer Kentaro Okuda, who has been refocusing the firm on private markets, advisory and wealth management. Still, the Archegos debacle continued to cast a shadow with the firm pledging to better manage risks.

“It would have been a pretty good quarter if there were no Archegos losses,” said Morningstar Inc. analyst Michael Makdad in Tokyo. On the retail side, Nomura continues to see positive net inflows of client assets and the favorable environment for investment banking will also likely continue, he said.

Nomura reported net income of 48.49 billion yen for the first quarter. In all, Nomura has taken a $2.9 billion hit from the implosion of Bill Hwang’s family office, second only to Credit Suisse Group AG.

In the weeks after the Archegos meltdown, Nomura outlined what it called “remedial measures” to bolster risk management. An external review of risk management practices within the Tokyo-based brokerage remains ongoing.

“We may have underestimated risks,” Chief Financial Officer Takumi Kitamura said on an earnings call with reporters Friday, referring to Archegos without naming it. “Our underestimation of the risks may have slowed us down in communication and escalation. We are now strengthening our risk management.”

Fixed-income trading continued to deliver, with net revenue rising slightly from the previous quarter to 88.1 billion yen, though it fell 43% from a year earlier which was marked by frenetic trading activity.

For the domestic retail business, client assets climbed to a record of 127 trillion yen driven by net inflows of cash and securities. Assets under the investment management division rose to a record high 65.8 trillion yen.

The results show that there “are few signs that customers have started to walk out on Nomura,” said Toshihiro Matsuo, an analyst at S&P Global Ratings. “What I cared most about was whether the incident involving their prime brokerage business had had any major impact on their relationships with other clients. I felt the result was fairly good because of that.”

Nomura will stop offering cash prime-brokerage services in the U.S. and Europe, and has given some clients about six months to find a new provider, people familiar with the matter said this month.

Investors are still waiting to see what becomes of executives within its investment bank that were suspended in April in connection with Archegos. Those include global prime brokerage head Dougal Brech and Joshua Kurek, head of the U.S. prime brokerage business. It now has a new global head of credit risk in Patrick McGarry.

To help its expansion plans in the U.S., which has the world’s biggest pool of banking fees, it tapped Wall Street veteran Christopher Willcox as co-head of its Americas unit and pledged to add non-Japanese outside directors.