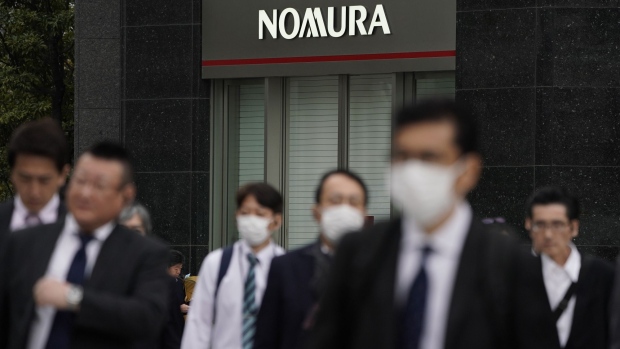 Pedestrians walk past a branch of Nomura Securities Co., a unit of Nomura Holdings Inc., in Tokyo, Japan, on Tuesday, April 23, 2019. Nomura is scheduled to release its full-year earnings on April 25. Photographer: Toru Hanai/Bloomberg , Bloomberg

(Bloomberg) -- Nomura Holdings Inc. plans to introduce flexible work on a permanent basis for its overseas staff, the latest global financial firm to consider such a move as the pandemic reshapes office life.

While the planning is at an early stage, Nomura sees both an “appetite and ability to support an operating model in which 50% of our Corporate workforce across our international offices will work remotely at any one time,” the company said in an internal memo seen by Bloomberg.

The move would provide the “right mix” of flexibility and work-life balance while maintaining productivity and face-to-face contact, Nomura said in the memo, which was circulated in recent months and remains under discussion.

A spokesman for Nomura in London declined to comment.

Individual levels of remote work would depend on a variety of factors including role, personal circumstances, clients and regulations, the document said. Nomura’s corporate division handles functions ranging from finance to risk management, compliance and human resources.

The Tokyo-based firm is working on a platform that allows employees to hold meetings and share information regardless of where they’re based, according to the memo. It’s doling out portable devices such as laptops and updating technology to improve connectivity, it said.

Nomura is also studying how to change office layouts, including to provide more space for meetings and breaks. The firm had 11,062 staff outside of Japan as of September, including 2,765 in Europe and 2,157 in the Americas.

At least one other Japanese financial firm is considering a similar move. Mizuho Financial Group Inc. is set to trim its Singapore office space, a move that was exacerbated by the pandemic, people with knowledge of the matter said. The banking group has already flagged plans to trim space in New York and London after determining that employees there remained productive while working from home.