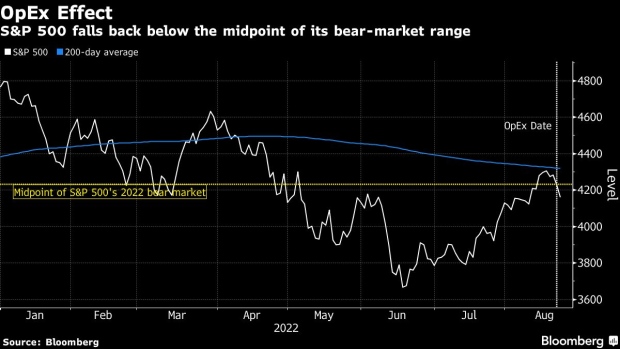 (Bloomberg) -- It’s no coincidence that US stocks began their worst retreat in two months right around the time when an estimated $2 trillion of options closed out in a widely watched market event.

In the telling of Charlie McElligott, a cross-asset strategist at Nomura Securities International, Friday’s options expiration has triggered a big shift in market positioning, whereby dealers are now causing an increase in volatility after previously helping to suppress price moves.

Before the event known as OpEx, these market makers were stuck in “long gamma” positions that left them needing to go against the prevailing equity trend to maintain a neutral market exposure. With derivatives contracts rolling off, dealers are now mired in a “short gamma” stance that requires them to sell stocks when they fall and buy them when they rise.

The dynamics may have underpinned Monday’s selloff, with the S&P 500 poised for its first back-to-back drop of 1% since mid-June. Along the way, the index gave up on 4,232, a level that marked the midpoint of the 2022 bear market and was earlier cheered by bulls as a sign for portending more gains ahead.

“The anticipated post OpEx ‘gamma unclench’ arrives and is allowing US equities a larger trading distribution thereafter,” McElligott wrote in a note Monday. That has seen the market “break below some notable technical levels.”

The view is the latest example of a controversial narrative that suggests that the stock market has effectively become a derivative of its own derivative -- one that upends the traditional relationship between options and their underlying assets.

The S&P 500’s return during the OpEx week has been negative in 16 out of the last 20 instances, with no obvious reason behind the market’s tendency to fall around the event, according to Chris Murphy, co-head of derivatives strategy at Susquehanna International Group.

Outside OpEx, Murphy says, there are plenty of catalysts for the market to pull back this time. The S&P 500 failed to surpass its 200-day average, a key trendline that many see would point to a sustained rally. Hedge funds were reloading on short sales. Federal Reserve officials kept warning that the central bank is far from being done with rate hikes -- just ahead of Jackson Hole symposium where Chair Jerome Powell is expected to deliver a speech on monetary policy.

“The Fed hawkish comments are finally getting some traction, shorts have largely been covered, sentiment back to neutral, equities were overbought,” Murphy said. “Maybe some investors used higher volumes during expiration as a source of liquidity and took advantage to sell a bit.”

Whatever the cause, the two-month rally that restored $7 trillion in equity values has come to a sudden halt. The Cboe Volatility Index, or VIX, jumped almost 3 points to 23.48 as of 1:10 p.m. in New York.

Options dealers are likely to remain in the “short gamma” regime as long as the S&P 500 stays below 4,200, according to Brent Kochuba, founder of analytic service SpotGamma.

“September has a very large options position as its a quarterly OpEx, and those positions are currently put heavy,” he said. “So the risk here is that, if we slide lower and implied volatility increases, it could push dealers to start shorting. Then there really isn’t anything to create relief until Jackson Hole.”

Not only that, a worsening market trend could turn one of the biggest equity buyers since mid-June into sellers, warns Nomura’s McElligott. After betting against equities during the first-half rout, rules-based money managers such as trend followers and volatility-control funds have been forced to unwind their short positions, snapping up more than $110 billion shares, the firm’s estimates show.

Further turmoil would force these computer-driven traders to load up on shorts again. For instance, a drop in the the S&P 500 below 3,989 would trigger a sell signal for commodity trading advisors, who usually take long and short bets in the futures market. The benchmark index dropped around 2% to as low as 4,141.37 Monday.

“We see those systematic and mechanical “buy” flows either largely spent, or at risk of actually becoming supply a few weeks out, IF vol was to reset higher here for a sustained period of time,” McElligott wrote.