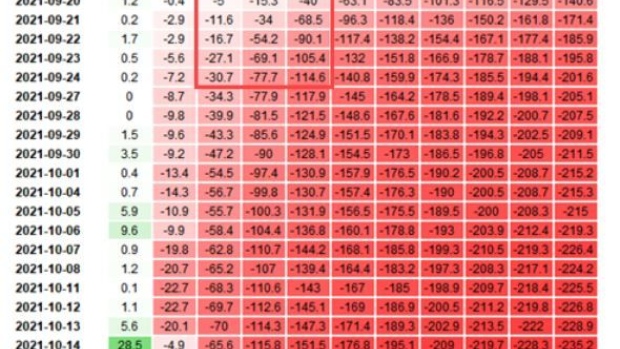 As China’s real-estate crisis intensifies and infects global markets, the S&P 500 slumped as much as 1.7% at the New York open to test a key 50-day threshold.

That intraday move breaks a level strategist Charlie McElligott warns will force selling from rules-based investors who allocate depending on how much stock prices swing around. A drop of that scale would spur between $15 billion and $40 billion of divestments from this breed of systematic fund, he said on Monday -- and more should the “volatility expansion” endure.

“You risk the mechanical de-allocating/de-grossing flows in coming-days,” McElligott wrote in a Monday note.

Confronted with worries over tax hikes, the delta variant and Fed tapering, clients lately have wanted “nothing but downside protection,” McElligott said.

The S&P 500 on Monday was headed for a ninth decline in 12 trading sessions. Gold, the dollar and the yen were among the only major assets in the green.

Still, nothing is ever simple in quant investing. While McElligott notes quant funds have an outsized exposure to stocks, Deutsche Bank AG analysis shows their overall equity bets are well below recent peaks. Stock positioning for Commodity Trading Advisers, for example, is lower than at the start of the year, according to a weekly positioning note published Friday.

CTAs are unlikely to notably delverage until we see stocks and bonds moving down together, Societe Generale’s Kokou Agbo-Bloua told Bloomberg TV on Monday.

“CTA strategies tend to look across asset classes, so if you have bonds and equity falling at the same time this is when you trigger stop-losses and unwinding,” he said. “At this stage the bond market has stayed fairly resilient simply because the Fed is still buying.”

The yield on 10-year Treasuries dropped three basis points to 1.33%.