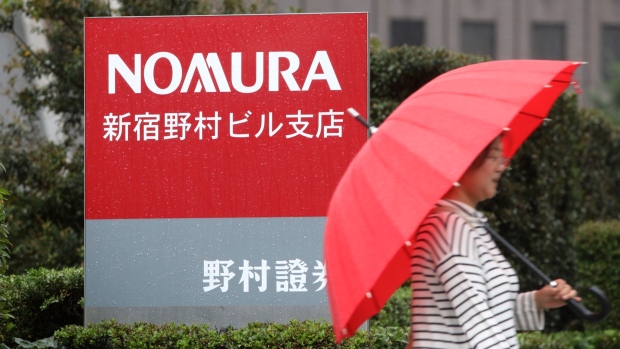 A pedestrian walks past signage for a branch of Nomura Securities Co., a unit of Nomura Holdings Inc., in Tokyo, Japan, on Monday, June 24, 2019. Nomura Holdings shareholders approved the company’s proposals for 10 board members, including Chief Executive Officer Koji Nagai and Chairman Nobuyuki Koga, at their annual meeting in Tokyo Monday. Photographer: Kentaro Takahashi/Bloomberg , Bloomberg

(Bloomberg) -- Nomura Holdings Inc. raised its pretax income target for the financial year ending March 2023 by 14%, with the bulk of growth expected to come from its wholesale division as it moves on from the implosion of Archegos Capital Management.

Japan’s biggest brokerage expects pretax income at its retail, investment management and wholesale divisions to rise to 320 billion yen ($2.9 billion), up from a May 2020 target of 280 billion yen, Chief Executive Officer Kentaro Okuda said in a speech during an Investor Day on Wednesday.

Income at Nomura’s wholesale division, which suffered a $2.9 billion hit from the collapse of Bill Hwang’s family office Archegos in March, is expected to rise to 150 billion yen, more than double the 64.3 billion yen for the year ended March 2021. The bulk of the growth is likely to come from advisory, wealth management and private markets.

Okuda apologized for the Archegos incident and said that as of May 10, the firm had closed more than 99% of its trading positions related to the U.S. incident. Only Credit Suisse Group AG suffered a bigger hit -- $5.5 billion -- from dealings with the family office.

Separately, head of wholesale Steven Ashley, said Nomura is seeking to boost advisory revenue by 50% and plans to hire more than 40 international relationship managers for its wealth division.

The firm is also targeting more than $100 million in incremental revenues related to digital assets in coming years and sees that asset class near to a “tipping point” with increasing institutional adoption, Ashley said.