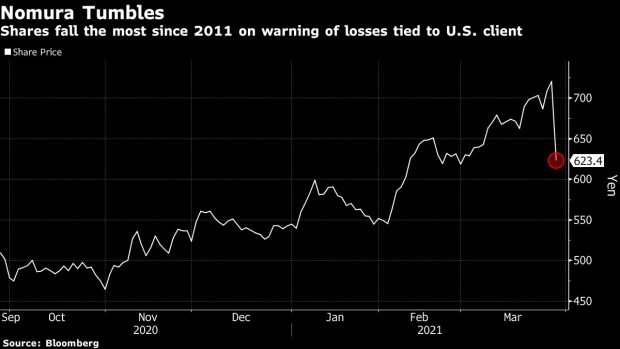 (Bloomberg) -- Nomura Holdings Inc.’s warning of a “significant” potential loss from an unnamed U.S. client is related to the unwinding of trades by Bill Hwang’s Archegos Capital Management, according to people familiar with the matter.

The family office founded by Hwang, a former Tiger Management trader, was one of Nomura’s prime brokerage clients, one of the people said, without providing further details. They asked not to be identified discussing private information.

Nomura said in a statement on Monday that the estimated amount of the claim against the U.S. client was about $2 billion.

Hwang’s New York-based firm is at the center of a margin call that led to the forced liquidation of more than $20 billion in shares on Friday, according to people familiar with the transactions. Among the sales were shares of ViacomCBS Inc., GSX Techedu Inc., Baidu Inc. and Discovery Inc.

A spokesperson for Nomura declined to comment beyond its earlier statement. The brokerage’s shares slumped as much as 16% on Monday, the biggest intraday decline since November 2011.

Nomura said the estimate of the claim against the client may change depending on unwinding of the transactions and market price fluctuations. There will be no issues related to the operations or financial soundness of Nomura Holdings or its U.S. subsidiary, the brokerage said.

Other prime brokers of Archegos include Goldman Sachs Group Inc., Morgan Stanley and Credit Suisse Group AG, according to a person familiar with the matter. The banks declined to comment.

The possible loss would blemish a bumper year for Japan’s biggest securities firm, which has benefited from a boom in trading and investment banking during the pandemic. Nomura’s profit jumped to the highest in 19 years in the nine months ended December.

Nomura said it will continue to take steps to address the matter and make a further disclosure once the impact of the potential loss has been determined.

The issue is the latest in a series of setbacks for Nomura as it tries to compete with investment banks around the world. Most famously, its ill-fated acquisition of Lehman Brothers Holdings Inc. assets during the 2008 global financial crisis caused costs to swell and culminated in writedowns a decade later.

Yet Chief Executive Officer Kentaro Okuda has been making progress on cost cuts announced by his predecessor two years ago. He has also been driving a push into private markets and wealth management to diversify revenue and reduce reliance on volatile trading.

(Updates with background on Nomura from the eighth paragraph)