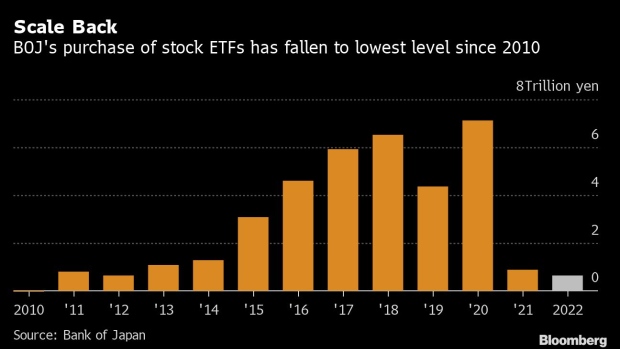 (Bloomberg) -- The Bank of Japan is likely to maintain its policy on exchange-traded funds while further decreasing the frequency of purchases as it focuses on controlling bond yields, according to Nomura Securities Co.

Normalizing ETF buying is a low priority for the central bank given that market participants are growing less concerned about the policy relative to worries over the impact of its yield curve control, Nomura analysts Naoya Fuji and Yunosuke Ikeda wrote in a Jan. 6 research note. In addition, any revisions to policy would require “thoughtful dialogue” so as to not spur concerns over future sales and an exit strategy, they added.

The BOJ’s buying of ETFs for domestic stocks hit a 12-year low in 2022, during which purchases totaled 630.9 billion yen ($4.7 billion), just a fraction of 7.1 trillion yen bought in 2020. Buying has slowed since March 2021, when the BOJ abandoned a target to purchase 6 trillion yen of ETFs per year.

“The obstacles to reducing purchases are lower than those to stopping them, but as this would merely constitute a tweak that does not involve any major change from the current situation, it would be hard to describe it as a bold change in policy,” the Nomura analysts wrote.

Concerns over an exit strategy could increase should Hirohide Yamaguchi, a former BOJ deputy governor, emerge as a leading candidate to replace Haruhiko Kuroda after he steps down in April. according to Nomura. In February 2021, Yamaguchi expressed opposition to ETF buying in a media interview, the Nomura analysts wrote.

“The interview took place just before the March 2021 Monetary Policy Meeting and thus did not reflect the effective tapering of ETF purchases that has taken place since that meeting,” the analysts wrote. “If he makes no new comments about ETFs, we see a risk that his appointment as the next BOJ chairman might suggest that the BOJ is approaching a halt to its ETF purchase program and a future exit strategy.”

Such a development would likely lower equity prices and reduce the so-called NT ratio, which compares the Nikkei 225 Stock Average with the broader Topix, according to Nomura.

The Bank of Japan will meet for its next monetary policy meeting later this month.

--With assistance from Hideyuki Sano and Toshiro Hasegawa.