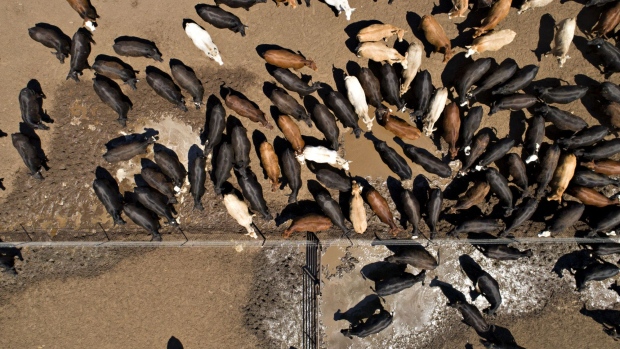 (Bloomberg) -- It took awhile to notice, but Tyson Foods Inc. eventually realized late last year that more than 200,000 of its cattle seemed to have gone missing on a Washington state ranch.

It turns out that they never existed. That’s the bizarre upshot from the collapse and bankruptcy of Easterday Ranches, which was under contract to house, raise and feed bovines for Tyson. All told, the episode cost the biggest U.S. meat company and another producer more than $200 million, and the rancher who gambled it away on cattle and corn futures may be headed for prison.

Easterday Ranches in Pasco, Washington -- a real place with real animals formerly run by one Cody Easterday -- raised the kind of cattle that ideally weigh more than 1,000 pounds each, according to court papers. Tyson Fresh Meats Inc. paid the ranch millions of dollars for purchasing cattle on its behalf and fattening them for slaughter, an arrangement that dates from at least 2010.

But five years ago, Easterday started sticking Tyson with phony invoices for never-purchased animals -- “ghost cattle,” according to the U.S. Department of Justice -- and used the proceeds to cover steep losses from risky futures trading, court papers show. Over the course of a decade, Cody Easterday lost money every year trading corn and cattle futures in his personal and business accounts, ultimately totaling more than $200 million, according to the Commodity Futures Trading Commission.

The CFTC filed suit against Easterday last week, alleging fraud. He used payments from Tyson to cover wrong-way bets and lied to the Chicago Mercantile Exchange about the ranch’s cattle inventory so he could keep trading, the agency alleges.

The arrangement came tumbling down in late 2020, when Tyson discovered that Easterday’s books -- as well as its own -- were “significantly in error,” Tyson said in a lawsuit targeting the ranch. Specifically, Tyson discovered the 200,000 missing animals. Easterday copped to the billing scheme after being confronted by Tyson representatives, according to court papers.

Easterday, 49, pleaded guilty last week to one count of wire fraud that cost Tyson and another, unnamed company $244 million, according to a Justice Department statement. He agreed to repay the sum and faces up to 20 years in prison, prosecutors said. Sentencing is set for August.

“Unfortunately, Cody was lured by the market and began very speculative commodity investing that was both unnecessary and uncontrolled,” Easterday’s defense attorney, Carl Oreskovich, said in emailed comments. “As with any gambler, he believed that he could and would repay the funds by wins in the commodities market, but that did not transpire.”

After Tyson learned of the fake bills, the meat giant cut payments to the ranch, destroying its finances. Easterday Ranches filed for bankruptcy in February shortly after Tyson sued it. The cattle that did actually live at Easterday Ranches -- more than 50,000 -- nearly ran out of food before a bankruptcy judge stepped in.

Tyson is seeking to recoup the lost funds and is working with its outside auditor on additional controls to prevent or detect this kind of situation in the future, a representative said in emailed comments.