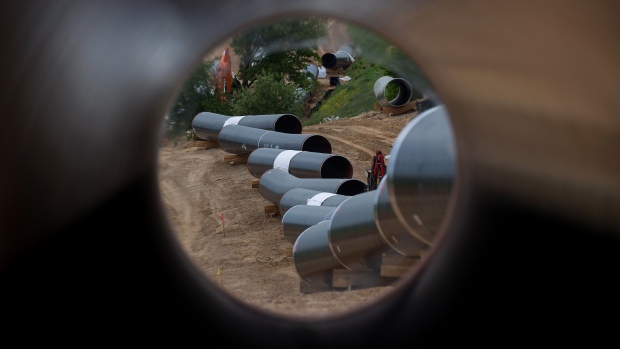 Sections of pipe sit on the European Gas Pipeline Link (EUGAL) site, a joint construction project by Sicim SpA and Bohlen & Doyen GmbH, in Gellmersdorf, Germany, on Tuesday, May 28, 2019. One of Europe's biggest natural gas users has turned decidedly pessimistic on the fuel, prompting traders to rethink their own outlook for the industry. , Bloomberg

(Bloomberg) -- Sanctions aimed at blocking the Nord Stream 2 natural gas pipeline from Russia to Germany were included by U.S. lawmakers a must-pass defense bill, according to two people familiar with the legislation.

The sanctions, which would apply to companies building the pipeline project of Russian energy company Gazprom PJSC, are modeled after a bill introduced earlier this year by Senators Ted Cruz, a Texas Republican, and Jeanne Shaheen, a New Hampshire Democrat.

The measure targets vessels that lay the pipeline as well as executives from companies linked to those vessels, who could be denied visas and have transactions related to their U.S.-based property or interests blocked.

The sanctions, which are attached to the National Defense Authorization Act, or NDAA, are intended to force a halt of the construction of the Nord Stream 2 pipeline, according to a Senate Republican aide. Cruz said earlier this week that the project was within 60 days of completion.

Lawmakers have pushed for the sanctions as they say they were growing frustrated with President Donald Trump’s failure to act on his own authority to block the project, which U.S. officials fear would give Russia new leverage in Europe.

Cruz has in recent days mounted an all-out push for the inclusion of the legislation in the defense bill. He has argued completion of the pipeline would “generate billions of dollars for Russia that will be used to fund military aggression against America and against Europe.”

The Nord Stream 2 project has divided the European Union, with nations led by Poland concerned about Russia’s Gazprom tightening its grip on the region if the pipeline comes online.

Lawmakers want to pass the NDAA before Congress is scheduled to leave for its holiday break on Dec. 20

To contact the editors responsible for this story: Joe Sobczyk at jsobczyk@bloomberg.net, John Harney