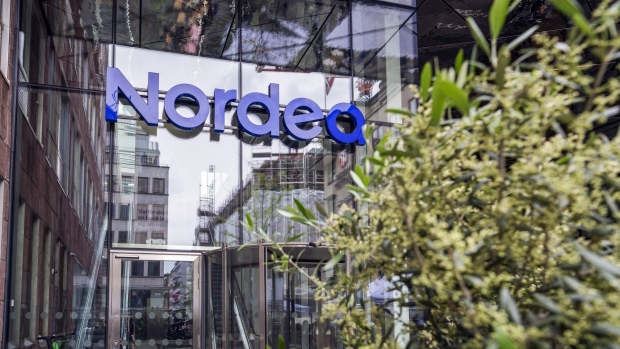 A sign hangs above the entrance to the offices of Nordea Bank Apb in Stockholm, Sweden, on Friday, May 24, 2019. Nordea, the largest lender in the Nordic region, has started to use an algorithm to read central bank policy statements. , Bloomberg

(Bloomberg) -- Nordea Bank Abp started an internal probe into a conspiracy theory-fueled research note where analysts referred to governments battling Covid-19 as “lockdownistas” and questioned the efficacy of the vaccines.

The Nordic region’s biggest bank on Wednesday retracted the note, “Nordea weekly: Papers please, and how to trade them!” from its website. The analysis, published on Sunday, caused a stir on Twitter after a member of the Finnish parliament, Mikko Karna, questioned its contents.

“It used to be ‘two weeks to flatten the curve,’ but somehow it has developed to ‘imprison the unvaccinated (or worse)’,” Chief Analyst Martin Enlund and Global Chief Strategist Andreas Steno Larsen wrote in the note. “The vaccine is apparently so good that you need to force people into taking it.”

They also made a Nazi reference and suggested booster shots actually increase transmission of the coronavirus.

In a post on Twitter, the bank said that the views set out in the note do not reflect Nordea’s official stance and the analysis “unfortunately misses the mark” in the way it is communicated. No further comment was available from a Nordea spokesman contacted by Bloomberg and the bank declined to say whether the analysts are still employed at the bank.