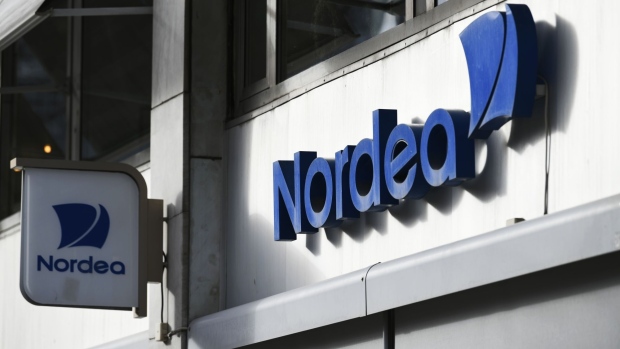 A sign hangs above the entrance to the offices of Nordea Bank Apb in Stockholm, Sweden. Photographer: Mikael Sjoberg/Bloomberg , Bloomberg

(Bloomberg) -- The entire wealth and asset management business of Nordea Bank Abp -- which currently oversees about $425 billion -- may exclude all investments that aren’t deemed sustainable in as little as half a decade.

The unit is already “very close” to that goal, and will probably be “100% ESG” in “5 to 10 years,” Frank Vang-Jensen, Nordea’s chief executive, said in an interview. About 70% of fourth-quarter flows into the wealth arm targeted products tied to environmental, social and governance goals, driving assets under management to a record.

As ESG investing grows, questions remain around what constitutes a sustainable asset. Driven by investor demand, issuers and asset managers are increasingly focusing on transition products, whereby companies that aren’t green yet have committed to cleaning up their acts, and get added to portfolios marked as sustainable. Some definitions are so broad that even chemicals shippers are included.

Issuance in sustainable assets, including transition products, will soar to more than $1 trillion worldwide this year, according to estimates by SEB AB, the bank that helped arrange the world’s first green bond over a decade ago.

Banks in the Nordic region are touting increasingly ambitious ESG agendas in an effort to draw in customers. SEB said this week it will start blacklisting all fossil-fuel assets at its investment funds as it steps up exclusion criteria.

The most elusive category of ESG remains the S, which stands for social investments. It’s a category that’s “been more difficult to figure out,” Vang-Jensen said. Nordea is now looking at public-private projects and investments in digital infrastructure, but definitions aren’t yet uniform.

It’s “the last piece of ESG and hasn’t, in my opinion, shown the same pace as the two others,” Vang-Jensen said.

Nordea’s focus on sustainability is a key reason its asset management soared in value at the end of last year. The bank recently announced it was closing its $7.4 billion climate fund to new investors, a step it said was necessary “to ensure a liquid and tradeable portfolio.” Nordea’s Stars funds, with $12 billion in assets under management, also offer sustainable investments and remain open to new inflows, amid seemingly insatiable demand for such products.

They “are a bit more expensive to produce, but there could be a stickier client relationship,” said Snorre Storset, who heads the wealth unit from Oslo. “So you’ll get paid over a longer period of time.”

Vang-Jensen also took the opportunity to quash rumors that Nordea might sell its wealth business.

“We have a clear strategy,” he said. “We want to grow our own asset management business, it’s growing well and we believe we can do even more.”